The right to watch the 2010 Olympics

The right to watch the 2010 Olympics 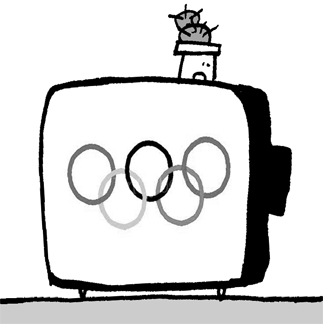 The 1936 Olympics held in Berlin, which is remembered as the Olympics in which Korean marathoner Sohn Kee-chung won a gold medal, also saw two epochal accomplishments in the field of visual recording.

“Olympia,” the first documentary feature film on the Olympic Games - directed by Leni Riefenstahl, a favorite of Adolf Hitler - is still considered one of the most important sports documentaries ever made.

Moreover, the Berlin Games were the first Olympics broadcast on television. The Third Reich transmitted images of the Games to all districts of Berlin via closed-circuit TV so that they could convey the enthusiastic atmosphere of the Olympics to as many people as possible.

Television broadcast of the Olympic Games started out of political consideration, but it did not take long for people to realize it could be lucrative. At the 1960 Winter Olympics held in Squaw Valley, California, winning the broadcasting rights for the Olympic Games became something of an issue. At that time, the United States’ CBS paid $50,000 for the rights to broadcast the games exclusively.

Fifty years later, NBC won the exclusive broadcasting rights for the 2010 Winter Olympics in Vancouver and the 2012 Summer Olympics in London for the price of $2 billion - a decision that did not come without criticism. Meanwhile, the Walt Disney Company, parent company of ABC and ESPN, secured the broadcasting rights for the 2014 Winter Olympics as well as the 2016 Summer Games, destroying NBC’s hope of being the Olympics’ sole broadcaster.

In Korea, SBS is the sole broadcaster of the Vancouver Olympics. Major broadcasters KBS and MBC are crying foul and calling themselves victims in the broadcasting-rights war. Their complaints don’t sound legitimate, however, when you look back at the 20-year history of conflict between the three big broadcasters over sports-events broadcasting rights and advertising revenue.

Some are critical of exclusive broadcasting rights because it supposedly threatens the universal rights of people to watch television programs. But it is unreasonable to assume that everyone wants to watch the same event all of the time or that TV-watching is a right.

Korean television viewers can still remember when the three major broadcasters decided not to broadcast the World Baseball Classic, despite the fact that most Koreans were obsessed with the competition. The broadcasters explained that they simply could not gather enough advertisement revenue from the event to make it worth their while.

Broadcasters advocate for a person’s right to watch an event on TV only when it means profits for them. We should not be fooled by the bottom line dressed up in the language of human rights.