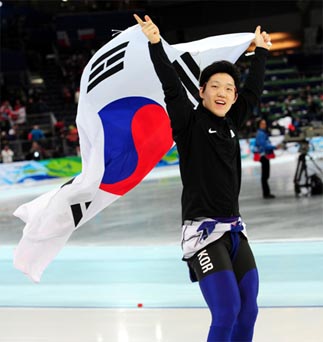 Korea was expecting at least one of its two veteran medal hopefuls to win the men’s 500-meter long-track speed skating event at the Richmond Olympic Oval yesterday but earned its first gold medal in such an event from an unlikely source.

Mo Tae-bum, 21, making his Olympic debut on his birthday, had the race of his life as he blazed around the track to his personal best time, earning a gold medal in the men’s 500-meter event. The gold medal is Korea’s first in a long-track speed skating event since it started competing in the Winter Olympics at the 1948 Winter Games in St. Moritz, Switzerland.

“The lack of interest from the media actually helped me to skate without putting too much pressure on myself,” Mo said in a post-race interview with Korean media. “Lee Kyou-hyuk helped me out a lot and I trained hard in the 500-meter as a way to prepare for the 1,000-meter. I think that led to an unexpected result today.”

Mo started off strong in the first heat, skating next to Finland’s Mika Poutala. He posted the second-best time overall at 34.92 seconds.

The second heat was delayed for approximately 90 minutes due to a problem with the ice surface after an ice-making procedure at the end of the first heat.

The unfazed young skater, matched up with world-record holding Canadian Jeremy Wotherspoon, kept his cool and improved his time to 34.90 to complete the event with a total time of 69.82 seconds.

“Today is my birthday,” he said. “However, I asked my family members not to attend the Olympics so I’m here alone. I feel like I’ve given myself the best possible birthday gift and it feels great.”

Although regarded as a promising skater with the potential to reach the medal round in the 500-meter event, Mo was considered less accomplished in the event than veterans Lee Kyou-hyuk and Lee Kang-seok. The Korean National Sport University student, who had won a bronze in the 500-meter race and gold in the 1,500-meter race at the 2009 Winter Universiade, is currently ranked second in the world in the 1,000-meter event, next to American Shani Davis.

Japan’s Keiichiro Nagashima (69.98 seconds) and Joji Kato (70.01 seconds) finished second and third. Lee Kang-seok, the reigning world champion and a bronze medalist at the 2006 Turin Winter Olympics, narrowly missed out on the medals, finishing fourth overall with the time of 70.04 seconds, while Lee Kyou-hyuk, whom many had tapped to finish first, came in with the disappointing time of 70.48 seconds, or 15th place overall. Lee Kyou-hyuk, who is competing in his fifth Olympics and still hunting for his first medal, will try his luck in the 1,000-meter race along with Mo and Lee Kang-seok tomorrow.