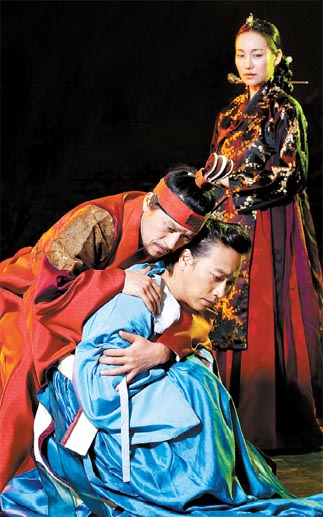 Oh Man-seok, in the blue robe, portrays the favorite jester of a 15th-century Korean tyrant (with the red headband, played by Kim Nae-ha), in “Yi” by Kim Tae-woon. Provided by the OD Musical Company

The 2005 Korean movie “The King and the Clown” was a box office smash, selling more than 12 million tickets, the second highest ever after “The Host” (2006). Yet not many realize the film is actually based on a play called “Yi.”

As in the movie, the story of Yi revolves around an apparently homosexual relationship between a tyrant king of the Joseon Dynasty (1392-1910) - Yeonsan (1476-1506) - and his favorite court jester Gong-gil. That story is interwoven with another relationship between Gong-gil and his lover Jang-saeng, the leader of his troupe. According to historical records, “Yi” was an honorific title given by the king to a beloved subject during the Joseon Dynasty.

The play was first staged in 2000, and a revival is now being prepared to commemorate its 10th anniversary.

“Ten years have passed since the premiere of Yi in 2000, and many things have changed over the past decade, particularly with the hit movie in 2005,” said Kim Tae-woong, the playwright and producer of the original production and the revival.

“One of them is my perception of who the main character of the play is. When I first wrote the play, I thought Gong-gil was the main character. Over the years, however, that has shifted to Yeonsan, and now to this group of clowns who have scenes that provoke these gusts of laughter from the audience.”

Kim added, “We now present this special performance marking the 10th anniversary, and I think many will be curious to know what might be different in this year’s show from those of past years.

“One thing I can assure you of is that the brilliant original cast will return to the stage for the 10th anniversary show.” 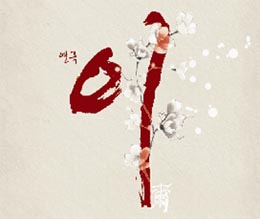 Fortunately, that cast is the cream of the crop, including Oh Man-seok, who performed as Gong-gil for the play’s premiere in 2000 and also reprised his role in 2001, 2003 and 2006, and rising musical theater actor Kim Ho-young, who is also cast in the role of the clown.

“The story of my acting career cannot be told without mentioning the play Yi. It is with great emotion that I return to the stage for its 10th anniversary performance,” said Oh, who rose to stardom with his performance in the original run.

Oh has now become a versatile actor with experience on the theatrical and musical stage as well as on the big and small screens.

“It is also meaningful because this will be my last time on stage as Gong-gil,” Oh announced.

The character Gong-gil is based on a real person mentioned in historical records from the period.

“I think Gong-gil was a very political person with an innate respect for authority, unlike how he appears,” the actor said. “When a mere court jester secures a government position, it means something.”

“I intend to focus on portraying how Gong-gil changes from a person with political ambitions into a true jester - which he in fact hated to become - after his lover Jang-saeng’s death,” he added.

Asked what will happen to the play past its 10th birthday, Oh said, “I think it is time for Yi to be upgraded and produced in a musical version.”

“In fact, I plan to participate in producing the musical version of Yi at the suggestion of writer Kim,” Oh said, adding that an attempt was made to mount a musical a few years ago in which he was not involved.

If the two can succeed where others failed, it will be familiar territory for Oh. The actor has experience producing the musical “The Harmonium in My Memory,” based on the 1999 movie of the same title.

“I’d like to produce a well-made musical for this great work, and I expect that audiences will be able to see it about two to three years from now.”

The revival of Yi opens on Feb. 27 and runs through March 21 at the Towol Theater at Seoul Arts Center. The play will be accompanied by a live traditional percussion quartet for the scenes featuring the jesters.