Artist’s 30-year descent into a coal mine, on canvas

Artist’s 30-year descent into a coal mine, on canvas 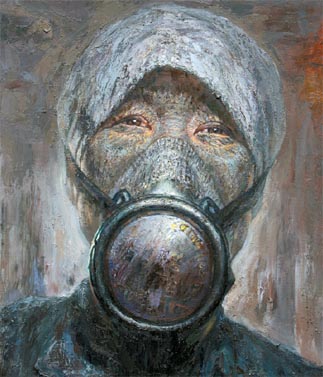 “Mrs. Kwon” is among 60 paintings in an exhibit by Hwang Jai-hyoung. Provided by the Gana Art Center

It’s not easy for anyone to let go of long-held treasures. So Hwang Jai-hyoung felt some pangs leaving his paintings behind in Seoul for his first solo exhibition in 16 years.

Hwang has been living among coal miners in Taebaek, Gangwon, since 1983. He has filled up his canvases with the stories of their lives and surroundings, and now has finally come back to Seoul to share them.

The long-awaited event has transformed the Gana Art Center in Pyeongchang-dong, downtown Seoul, into a virtual Korean coal mining town. For some older museumgoers, it might be like walking into a time machine.

Hwang’s exhibition, “Dirt to Grasp and Land to Lay On,” continues at Gana until Feb. 28.

The exhibit is the culmination of a lifelong quest for Hwang, who decided to become a painter right after turning 11. Even as a young boy, Hwang felt an anxious need to capture things he saw on paper.

After graduating from the College of Fine Art at Chung-Ang University, Hwang found early success in the art world, but then suddenly decided to move to Taebaek. Hwang said he realized that he needed to understand labor completely, not just as an idea, and so he worked as a coal miner for three years.

“The experience was like chewing rubber,” Hwang said, referring to the name of one of his paintings. And the sacrifices were extreme: Hwang nearly lost his sight, and now works with contact lenses.

Hwang has put down his experiences on canvas after canvas. An image of a man eating a packed lunch surrounded by jet-black coal dust and a woman separating stone from coal are among the 60 works at the exhibit.

During his time in Taebaek, the painter expanded beyond oil. On some of his works, Hwang used soil and coal dust, even sand and sawdust with glue.

“I have a range of 60 different soils in my workroom. I want to express the essential vitality of life, honesty and rustic simplicity on canvas,” Hwang explained.

The long period recorded means the viewer can see how Hwang’s attitude shifted over the years. His once rough and realistic depictions gradually became somewhat brighter.

“These days, a stone on a roadside or a flip-flop worn by a miner don’t seem personal. Vegetable gardens and alleys also attract my eye. I don’t think I have my old stubbornness anymore,” Hwang said.

“I used to shoo away the children when they were around me, but now I play and paint. I can always paint tomorrow if I can’t finish it today.”

Hwang believes that his long struggle has deep relevance even for the relatively insulated population of the capital. “I feel Seoul is more like a coal mine than Taebaek. People moaning in that atmosphere seem more like coal miners than the real ones,” Hwang said, adding he hopes his paintings “act as a wake-up call for those who go to bed with no worries, and help those in pain and agony find rest.”