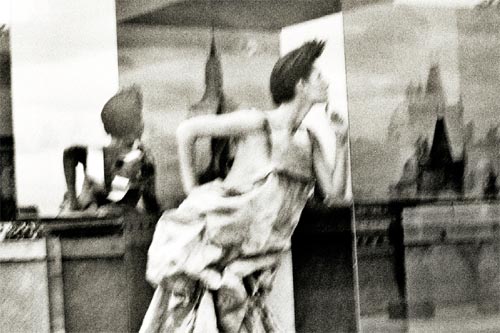 The picture above, titled “Libena,” appears with 15 other selected photographs by Jiri Turek in a show at the Czech Info Center in Seoul. Provided by the photographer


The popular U.S. television show “Sex and the City” may claim to be a glimpse into the lives of four typical New York women, but in fact its realism leaves a bit to be desired.

A photography exhibition opening in Seoul with a similar name hopes to fulfill that promise - not just for New York, but for many cities around the world.

“Woman and the City,” an exhibition hosted by the Czech Info Center affiliated with the Czech Embassy, features 16 photographs by Jiri Turek, a leading Czech photographer.

“I find women a very interesting subject for photography, particularly those passing me on the street, because I can combine my fashion and documentary experience to capture the free and independent image of women who don’t stylize themselves into something they are not,” said Turek, who was unable to attend the opening of his show in Seoul last Thursday, in a recent e-mail interview with the JoongAng Daily.

Czech Ambassador Jaroslav Olsa, Jr., who acted as an organizer and curator of the exhibition, described the genesis of the event. “While I was wondering how we can draw Korean people’s attention to the Czech culture, I came up with this idea of holding a photo exhibition featuring a famous Czech photographer’s works.”

Turek’s works currently on show in Seoul are all black and white and use a special technique the photographer called “lith print.”

“Lith prints are classical black and white prints made in a traditional way in the darkroom, only using a special developer which displays diluted images,” Turek said. “It gives some moody feeling to the photographs, and since the developer goes through the paper every photograph is unrepeatable and original.”

The Seoul show is related to Turek’s ongoing project called cityLAB, which involves taking a series of photographs in major cities around the world in order to capture the feel and atmosphere unique to each location.

“My main objective in work is to create visual images that people would like to hang on the wall as a decoration like paintings so that when looking at the pictures, they can virtually ‘travel’ to the city, feeling through the smell, light and even emotions that I tried to capture in a picture,” the photographer said.

“My inspiration comes from everyday life, and I also have this urge to express my artistic feeling using photography, which is a sort of tool to get my art across to the people around the world,” he added.

Turek, who started his professional career as a press photographer in 1990, went freelance 10 years ago, focusing on portrait and fashion photography. He has photographed celebrities including The Rolling Stones, David Bowie and Luciano Pavarotti, and is also active in the advertising industry. More of Turek’s works can be seen at his Web site at www.jiriturek.com.

“Woman and the City” runs until March 13 at the Czech Info Center on the third floor of the Castle Praha building, located near Hongik University in western Seoul.