Beckham’s past, present will meet on one field

Beckham’s past, present will meet on one field 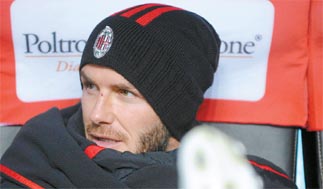 AC Milan’s David Beckham sits on the bench before the start of the Italian Series A football match against Udinese at the San Siro stadium on Feb. 12. [REUTERS]


MILAN - David Beckham could hardly contain his excitement on the eve of the Champions League tie between AC Milan and Manchester United at the San Siro here yesterday.

Beckham won this competition back in 1999 with United and left the club four years later to join Real Madrid. This game will be the first time he has run out with his former Manchester United teammates as an opposition player.

But Beckham said he would have no mixed loyalties when he stepped on the pitch.

“Of course it will be a very emotional match for me,” he said yesterday. “In the seven years since I left United, tomorrow night’s match will be the first time that I’ve come up against [Sir Alex] Ferguson’s team as an opposition player and I’ll do everything I can to help Milan win.

“United is a great team with great players who know how to hold onto the ball.

“[Wayne] Rooney is a key player for them. We will have to play our own game, we’ll need a bit of luck but the important thing is that we win.”

Despite his age - he’s 34 - Beckham feels he has even more to offer football than he did when he played with United.

“It’s seven years since I left United and I thought I would stay there my whole career, but instead I’ve changed clubs three times,” he said.

“With respect to seven years ago, now I’m more experienced as a person and as a player. Playing for different clubs always gives you more experience.”

Both teams lost important stars in the offseason, with United’s Cristiano Ronaldo and Milan’s Kaka both heading to Beckham’s former club Madrid. Beckham feels both teams have been equally affected by those losses.

“I think that when a club loses a player of the caliber of Kaka or Cristiano Ronaldo [whom United bought as a replacement for Beckham] they always feel a difference,” he said.

Although Milan has won all four previous knock-out stage clashes between the two clubs in Europe’s premier competition, United’s recent Champions League history has been more successful than Milan’s.

Both have lifted the title once in the last three seasons, but United has also reached another final and a semifinal while Milan was knocked out in the second round two years ago and didn’t even qualify last season.

Even so, Milan coach Leonardo believes the teams are evenly matched and he’s taking nothing for granted.

“The two teams know each other well, not just because of the matches between them in the recent past but because we are continuously studying each other,” said the Brazilian.