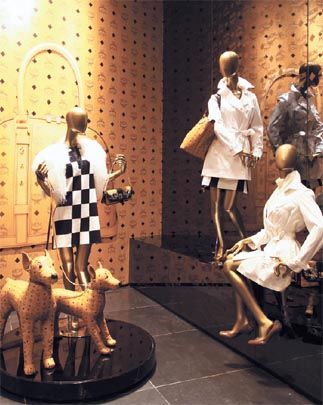 MCM’s flagship store in the Three on the Bund building in Shanghai opened in January.

The European new luxury brand MCM continues its march to become a major global player with the opening of its renovated shop on the first floor of the luxury zone at Lotte Department Store’s main branch on February 18.

By opening a store on the first floor luxury zone, MCM has proven it can stand on par with its world-famous competitors - now its neighbors at the Sogong branch.

It’s the beginning of a campaign to support Korean companies by Lotte Department Store, the largest department store chain here. An executive at the retailer remarked, “We will continue to give full support to notable companies promoting global policies with national brands that have significant effect on the Korean market. As the leading department store in Korea, we will show continuous interest and care and fulfill the role of cooperator.”

There are 11 luxury brands in the first floor luxury zone at Lotte’s main branch, including Christian Dior, Ferragamo, Gucci and Fendi.

At the new MCM shop, the brand’s Gold Line will be displayed and an exclusive line will be launched especially for Lotte.

MCM will also host an exclusive opening ceremony to cement its place as a luxury brand and continue its rapid progress in the world. To contribute, MCM has prepared various events. 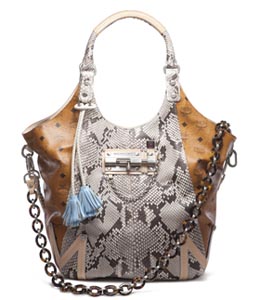 A demonstration will show the production process of MCM bags, with artisans from Germany at a special booth. The artisans make one stitch at a time, showing off the German spirit and heritage of MCM. Gifts made at the booth will be available.

The brand will also revive its collaborations with luxury automakers that were carried out during MCM’s heyday in Europe in the 1980s. A collaboration with BMW will match two elements of a modern, dynamic luxury lifestyle, showing perfect harmony between the two Munich-based brands. The interior of a BMW convertible will be done up in MCM’s iconic Cognac Visetos leather.

The Sungjoo Group acquired the German luxury brand MCM in March 2005 and has expanded into 35 countries, opening shops in Germany, Italy, England, the United States and China. MCM became available at Saks Fifth Avenue in the U.S. in 2009, proving itself a rising star on the global market.