[In-depth interview] This CEO is building on the humanities

[In-depth interview] This CEO is building on the humanities 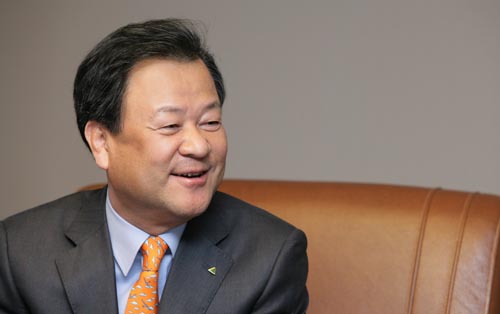 Kim Joong-kyum, 60, CEO of Hyundai Engineering and Construction Group, has been in the construction industry for more than 30 years now.

An architectural engineering major who graduated from Korea University in 1976, Kim built his career working on construction sites both at home and abroad, including the Middle East.

Seemingly a hard-core engineer, Kim publicly advocates the importance of the humanities these days. He recently instituted a plan to hire humanities majors during the company’s college recruitment this year - a rare move among domestic companies which traditionally prefer graduates from a college of science, business or law to those from a college of liberal arts.

Hyundai Engineering and Construction was no exception before Kim took the initiative, as more than 90 percent of the firm’s current employees studied science, business or law during their undergraduate years.

With Kim’s initiative, however, the percentage of new Hyundai Engineering and Construction employees who studied the humanities has jumped to 10 percent this year, up from 1 percent just a year before. The recruits even included a sculptor.

And Kim plans to increase the percentage gradually over the coming years. To hear more about his reasoning, the JoongAng Sunday sat down with Kim.


Q. Why are you emphasizing the humanities now at the construction company?

A. In the past there was no need for us to have workers with knowledge of the humanities, but things have changed. I think that construction is not just building something, but a delicate endeavor calling for knowledge from various fields. Today’s construction worker needs to be more than a mere developer, but a general producer whose work expands to include design engineering and project management. This age calls for “diversity,” which is contrary to the principle of “standardization” that guided us in the past. And I think diversity is more related to the humanities, which includes various fields of study, rather than practical studies such as engineering science or business administration. We need people who can read social trends and consumer sentiment.


Your initiative to hire new employees who majored in the humanities has produced a sensation across the industry.

This year we hired 15 new employees who majored in the humanities, which accounted for about 10 percent of the total new hires. While we had almost no one whose field of study was related to the humanities in the past, this year we recruited experts in sociology, psychology, philosophy, industrial arts and even sculpture. We also made a drastic reform in the curriculum for the program educating new employees to closely resemble the curriculum of the school of humanities of Seoul National University.


Why are craftsmen and sculptors wanted at construction sites?

While in the past we focused on the building itself during construction, now we believe a building should be understood in the context of urban development plans, culture and a neighborhood’s history. Hence, design has become an important factor when constructing a building.

I believe that a building should be a human-oriented place that “flatters the five senses.” We cannot attract consumers any more with the ways of the past - focusing on hardware but neglecting software.


Which particular area of work do you think those majoring in the humanities are best fit for?

We will be able to post employees who studied architectural engineering and those who studied sociology, psychology and philosophy all together in the product-development department, for instance, to generate a synergistic effect. A construction company should create an attractive product, that is, a building in which people can relax and have a happy life. In order to do so, study into people’s thoughts is necessary, and that’s best dealt with by those who majored in the humanities.

Furthermore, people’s residences vary according to income - which should also be a factor when building a community - and such things are best understood by those who have some acquaintance with sociology and psychology.

How many more employees who studied the humanities do you plan to hire in the future?

I can’t give you a specific number now, but the bottom line is that we intend to increase the number. I think that workers with knowledge about the humanities will be more in demand when the existing staff in the company realizes how important they are to our work.

Do you also plan to revise the company’s employee education program?

Yes. While we have so far mainly discussed the productivity of employees, it’s time to talk about how to invest in order to raise the future value of employees. I have a plan to have 80 percent of the company’s staff on duty while giving the other 20 percent some time off for study, research or leave for recharge on a regular basis.

Do you think it will work?

I think I should have instituted it earlier. Hyundai Engineering and Construction has a lot of foreign employees because the company does business around the world. People from different countries with different backgrounds are currently working together. The number of employees working abroad has now reached 40,000, more than 10 times the number of domestic employees, who number around 3,800. We have had some cases in which employees from different backgrounds misunderstand each other due to cultural differences.

There were some cases where Korean managers who were sent to manage local workers at overseas construction sites had trouble doing their jobs there because they lacked knowledge of the local customs, ethics, history and culture. I also think it will be good if we educate foreign employees about Korean corporate culture and send them to manage local workers in their home country.

What made you take an interest in the humanities in the first place?

Six years ago I worked on the project that launched Hillstate, the apartment building brand of Hyundai Engineering and Construction. The biggest question I was faced with at the time was, what is necessary to enable people to live comfortably and happily? While focusing my thoughts on people - us, the human being - I came across the humanities and came to believe that construction is more closely related to the humanities than to engineering.

It is true that engineering knowledge is necessary for construction work, but a building which is constructed without consideration of humanitarian values such as history, religion, philosophy and art will lose its vitality in the end.

Going back to the story about launching the brand, I didn’t have anyone I could turn to and seek advice regarding such humanitarian values, since workers at our company were all either engineering science or business administration majors. We finally launched the Hillstate brand in 2006, but I’ve felt a thirst for knowledge about the humanities all the while.