For these quadruplets, a special homecoming

For these quadruplets, a special homecoming 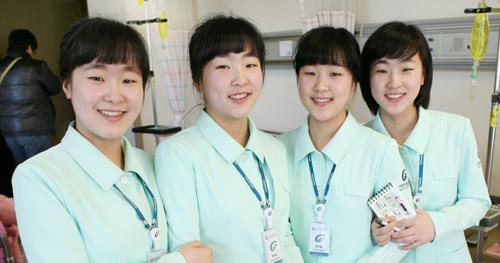 Quadruplets Hwang Seul, Seol, Sol and Mil came back as nurses to the hospital where they were born 21 years ago. [NEWSIS]

Identical female quadruplets were full of expectations and excitement as they toured the Gacheon University Gil Hospital in Incheon on their first day of work yesterday morning.

For these four cub nurses, Hwang Seul, Seol, Sol and Mil, the hospital is home ground. All four returned to the place for the first time since they were born there 21 years ago in January.

“I feel like I’m a real nurse since I am wearing this yellow-green gown, and I’m looking forward to meeting a lot of people,” said the second-born, Seol.

The eldest, Seul, added, “Even though I am a little nervous on my first day at work, I will work hard and get used to this new environment in order to become the best nurse.”

The Hwang sisters are the second quadruplets born in Korea; the first set was born in 1977.

Their father, Hwang Young-cheon, and mother, Lee Bong-shim, both 56, recalled that as babies, the four girls would cry in sequence, one after another.

Once one sister began crying, it would be a while before the nursery grew quiet. 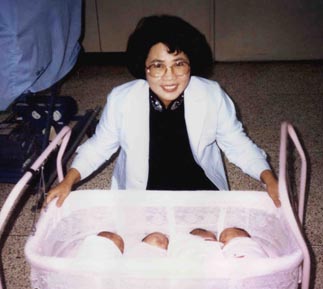 Lee Gil-ya, chairwoman of the Gacheon University Gil Hospital, with the four girls as babies. [NEWSIS]

After living separately in Suwon, Gyeonggi, and Gangneung, Gangwon, the four sisters moved into a house near the hospital last Thursday after they all got jobs at the hospital.

Though the family was in hard economic straits, the quadruplets studied hard in their middle and high school years.

They were not only top students but were also talented in Taekwondo, which they began learning in first grade. The sisters had won several medals in competitions.

Beyond academics and sports, the sisters shared the same career goal. In 2007, Seul and Mil entered nursing school at Suwon Women’s College while Seol and Sol advanced to a nursing school at Gangneung Yeongdong College.

And that allowed Lee Gil-ya, chairwoman of the hospital’s board of directors, to fulfill a long-ago promise.

Twenty-one years ago, the chairwoman admitted the girls’ mother to the hospital after other clinics refused to treat her.

Though she was surprised at the number of babies, Lee ordered a doctor to conduct a Caesarean section to ensure their safety.

All four were born healthy, and Lee not only remitted the cost of the surgery, she promised to that once the children were grown, she would provide full tuition if they were admitted to college.

In addition, Lee even promised that the hospital would admit the four sisters as nurses if they passed the state exam.

“I would like to praise the mother for raising all four identical quadruplets - such a rare thing in the world - with such good care,” the chairwoman said.