Another surprise gold for Korea in speed skating

Another surprise gold for Korea in speed skating 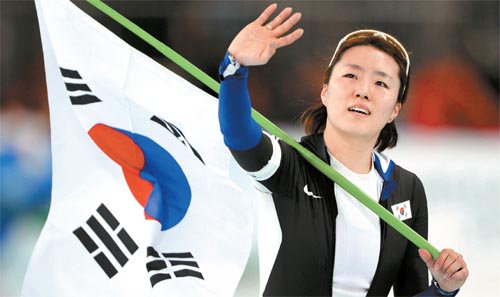 Lee Sang-hwa waves to the crowd during her victory lap around the Richmond Olympic Oval in Vancouver after winning the women’s 500-meter speed skating event during the Winter Olympics yesterday. [REUTERS/ YONHAP]

No other country has won both the men’s and women’s 500-meter gold medals. And Lee’s gold is the first medal for a Korean female long-track speed skater.

Lee, 20, won gold with a time of 76.09 seconds, edging her competitor and world-record holder Jenny Wolf of Germany by 0.05 of a second.

Lee remained stoic in the immediate aftermath of the race. Upon glancing up at the scoreboard, she hung her head and began to sob and continued to do so until the flower ceremony.

“It’s hard to believe that I won,” said Lee in a post-race interview. “I cried at the Olympics four years ago and it was out of disappointment. But this time, it was tears of happiness.”

Lee made her Olympic debut as a 16-year-old at the 2006 Turin Winter Games and ended up fifth overall in the women’s 500-meter event.

Although it was a solid debut for an inexperienced teenager, Lee was not pleased with the results and was seen shedding tears when the race results were posted.

Known as a consummate hard worker who trained with the men’s speed skating team from an early age, Lee was able to become the world’s top skater in the sprint event of speed skating.

Yesterday’s result was identical to the International Skating Union World Sprint Speed Skating Championships held a month ago in Hokkaido, Japan. Although Lee had difficulties facing Wolf in the past, she has now defeated the German skater twice this year.

“It was nerve-racking. Lee Seung-hoon and Mo Tae-bum had won medals so I did feel some pressure coming into the race. I did not get much sleep,” said Lee. “I knew that Wolf boasts a quick time in the first 100 meters of the race. Thanks to a solid time in the first heat, I was also able to race well in the second heat.”