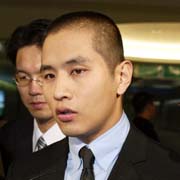 Locals are taking note because of the appearance in the film of Steve Seungjun Yoo, a hugely popular K-pop singer in the late 1990s and early 2000s who was banned from entering the country when he obtained U.S. citizenship to avoid conscription in the Korean army.

In a phone call with Newsen on Tuesday, a local public relations representative for the film said, “Yoo’s entry into Korea is impossible, and there isn’t confirmation of visits by other actors such as Jackie Chan and Wang Leehom either.” The representative quickly added, “Yoo’s contribution to the movie is big, so there won’t be any cuts to the parts in which he appears.”

The singer joined Jackie Chan’s company, JC Group International, in 2006 and has since worked in China.