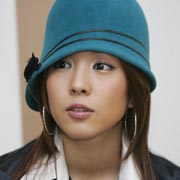 BoA gets personal with her seventh official Japanese album, being released in Korea today. The work titled “Identity” marks the first time the Korean singer active across Asia has produced her own album. It was released in Japan on Feb. 10 and hit No. 2 on the Oricon Daily Album Charts on that day.

A total of 13 songs will be on the album, including tracks that were released in single form such as “Bump Bump” and “Mamoritai.” Guest artists featured on the album include Verbal from M-flo and Daichi Miura.