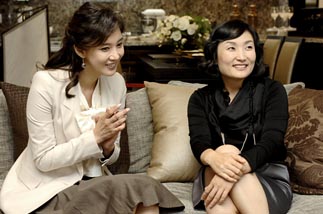 Cameos are all the rage on Korean TV this season, with A-list celebrities dropping into episodes of “High Kick,” “Chuno” and others to spice things up.

Most recently, actor Jeong Woong-in, who starred in the film “My Boss, My Hero,” appeared in the family sitcom High Kick as a bank robber who ends up carjacking a student driver on her first day of practice - she’s so nervous and inexperienced she can only go about 20 kilometers (13 miles) per hour.

“Sitcoms are naturally zany and comical, so cameos are a good way to intrigue viewers,” said Kim Byung-wook, producer of High Kick. More than 20 celebrities have made cameo appearances on the show, now in its second season. Most of them worked with Kim on his previous sitcoms, or they are friends of the actors. For example, singer Kim Yong-jun, a member of the local band SG Wannabe, played a veterinarian alongside Hwang Jeong-eum, a regular whose character keeps a dog on the show. Since Kim and Hwang are a real-life couple, viewers were excited to see them together.

“Kim Yong-jun rocks, and I want to see more cameo appearances [on the show],” wrote Lee Jeong-ah on the comment board of High Kick’s official Web page. 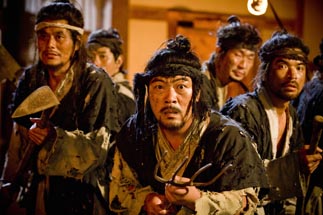 The hit TV drama Chuno, or “Pursuing Servants,” about Joseon-era escaped slaves and the bounty hunters who track them down, also uses cameos in a creative way, with one in each episode from the beginning.

“Most of the actors who make cameos are close to the drama’s staff and actors. Although cameo appearances often are only a few seconds long and they are friends of actors and staff members, the actors are paid,” said Kim Hye-rim, who is in charge of promoting the drama at the public relations agency Haneul.

As Chuno claims an audience share of 30 percent or more, making it the top TV drama on Wednesdays and Thursdays across the nation, its rivals are also increasing their number of cameo appearances to compete. “Oby/Gyn Doctors” on SBS and “The Woman Who Still Wants to Marry” on MBC have included many unexpected guests since they premiered.

But some industry officials say that the correlation between cameos and ratings is weak, and that past a certain point cameos distract the audience from the drama’s main plot line.