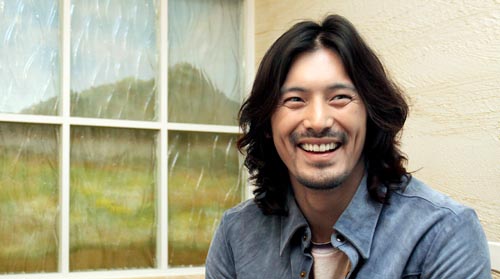 In order to perfectly immerse himself in his role as Song Tae-ha, a slave on the run, actor Oh Ji-ho let his hair and beard grow. [JoongAng Photo]

The KBS TV drama “Chuno,” or “Pursuing Servants,” is a smash, with ratings of around 30 percent, putting it tops among Wednesday-Thursday TV dramas. And it shows no signs of stopping.

Much of that popularity is thanks to a strong plot about slave hunters in pre-modern Korea, but at least a little of its appeal comes from its flamboyant action sequences, with leading male characters flexing their six-packs. Foremost among these heartthrobs is Oh Ji-ho, who, to put it inelegantly, keeps female viewers drooling - and glued to the tube.

Oh rose to stardom in romantic comedies, and at first, industry insiders said the actor had been miscast as the complex character Song Tae-ha in the serious drama. Even Oh himself once said that he had failed to land roles so often that he began to see his good looks as a liability.

But the market has spoken, and viewers and bloggers agree Oh was the right pick, and he is seizing the chance to reinvent himself.

“After my last role in ‘Queen of Housewives,’ I wanted to play a real macho man,” Oh said. In that hit show, which centered around struggling housewives who push their husbands up the corporate ladder, Oh played an incompetent husband - far from a strong male lead.

This time, things are different. At one point Oh’s character grabs a live snake with his bare hands and takes a bite out of it. He swings around a sword that weighs about 4 kilograms (8 pounds) with a single hand.

“I worried a lot about viewers comparing me to [my castmate] Jang Hyeok because he is practically a martial arts expert,” Oh confessed. But it didn’t take long for the natural-born athlete to learn the basics of martial arts and how to wield his blade.

“I think I’m good at all types of sports, especially ball games,” said Oh, who hits clean-up on a celebrity baseball team. Oh said it took less than a year for him to achieve an average score of 180 in bowling, quite a feat for an amateur player.

Although Oh picked up the martial arts and other physical skills easily, his role in Chuno demands constant hard work.

In order to maintain his picture-perfect abs, Oh works out hard between scenes. He and his castmates also shoot the drama half-naked, despite recent subzero temperatures. Nevertheless, Oh is still happy with his decision.

“I love to travel around [for the show]. It’s just fun for me to visit every nook and cranny of Korea,” he said. “I can even go into some off-limits areas because of this drama. I’m also completely alive and kicking even if I can’t get a wink of sleep for days because of filming.”

The actor is also pleased that he was able to make friends his own age through this drama.

“Jang Hyeok, Lee Jong-hyeok and I are the same age. We often hang out when the camera is not rolling,” he said.

Asked about the hardest part of being on Chuno, Oh answered, “Romantic scenes with my co-star are always hard because my character is a man of few words, yet I have to portray his romantic side since he’s deeply in love with [the character] Hye-won.”

Oh turned 35 this year, making this the 12th year since he entered show business. But after all this time, he says he is just starting to understand the beauty of acting.

“When I was in my 20s, I thought I would retire from acting and run my own business when I turned 40 because I didn’t know what I was doing then. I had many ups and downs, but I think I can stay focused on acting now,” he said. “I want to grow old with acting.”