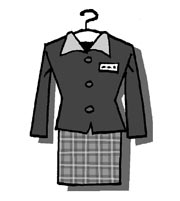 Clothes serve more than just to protect our body and make us look nice. They also act as spiritual intermediaries. It is not difficult to find examples of this in all ages and countries.

Peddlers during the Joseon Dynasty (1392-1910), whom King Taejo - the dynasty’s first king - called “Bobusang,” were famous for their strong sense of brotherhood.

It is said that their friendship was stronger than the bond between father and son and among brothers. One of their strongest traditions was the exchanging of clothes. The Bobusang would switch clothes with each other whenever they met one another on their travels. This practice confirmed their loyalty to the group and expressed their solidarity among each other.

The custom of handing the robes of senior Buddhist monks over to junior monks can be seen as a metaphor for handing off the spiritual strength of the senior monks to the junior ones.

Buddhist believers who want to be Buddhist monks still wear street clothes when they begin their endeavor.

When the heads of believers are shaven to become monks, they are given the used robes of other monks. Senior monks who got new robes used to hand their robes over to junior monks. When old monks pass away, their robes are usually handed over to their disciples.

It is obvious that this practice of handing off clothes is more than just a practicality - it is a religious belief.

Queen Elizabeth I (1533-1603) of England used to hand her clothes over to court ladies or noblewomen. As the clothes were the symbol of the queen’s favor, they all regarded them as gifts of good fortune.

Today in the United Kingdom, handing clothes over to others is so common that it is joked that elder brothers and sisters even hand their underwear over to their younger siblings.

Of course, people in England don’t just hand down clothes because their clothing is very durable and lasts many years. The passing on of garments is a symbol of brotherly love and encourages a sense of unity among brothers and sisters.

The people of Jakarta, Indonesia, have the tradition of giving their wedding dress to the brides in the same family from generation to generation.

This also must be a custom that has more to do with love and a sense of unity than economic need.

With the new school term only a few weeks away, students and parents are busy buying used uniforms at uniform recycling centers supported by local governments and education offices. Since they gather, wash and repair used uniforms and then sell them at such a low price ranging from 500 won ($0.44) to 5,000 won per set, it is almost like getting them for free. These recycling centers actually offer a good opportunity for parents to save money since they don’t have to buy expensive new uniforms.

Handing down used uniforms to freshmen is more than just a matter of money. When senior students give their uniforms to junior students, the spiritual gain they get from sharing mutual trust and love is also big.

I wish the campaign of handing uniforms to freshmen would spread like fire on the prairie. Then the bad habit of ripping up uniforms, pouring flour on them and hazing graduates on their graduation day may die down.