Paik expected to be a honorary 5 star

Paik expected to be a honorary 5 star 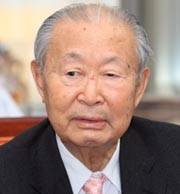 Korea’s political parties will set aside their differences, at least temporarily, and ask the National Assembly to nominate Paik Sun-yup, a retired army general who served in the Korean War, to become the nation’s first honorary five-star general, an unprecedented honor.

Kim Jang-soo, representative of the ruling Grand National Party and former defense minister, said yesterday he would raise the issue today at the general meeting of the Defense Committee under the National Assembly. “The main opposition Democratic Party is also behind this idea,” Kim said.

Kim said honoring Paik would be part of the commemoration of the 60th anniversary of the outbreak of the Korean War. Under the current law, only active generals considered to have made great contributions to the nation may be given the rank of five-star general. But Kim stressed that Paik’s designation “would literally be honorary.”

“Defense Minister Kim Tae-young told the National Assembly last year that he would actively pursue this matter,” Kim Jang-soo added. “It would be a symbolic move and the government should take the initiative.”

Kim Young-woo, another GNP representative and a member of the Defense Committee, said aside from honoring Paik, the government should run projects to show appreciation for all Korean War veterans.