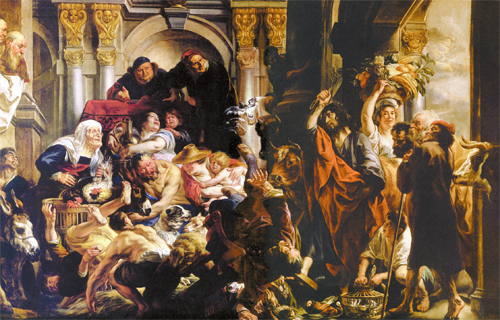 A stunning mural by Giotto di Bondone (1267-1337), a master of medieval art, depicts the life of Christ. The right side of the painting shows Jesus, with a fierce scowl, about to hit two men with a whip. It’s a little shocking for those familiar only with gentle and merciful images of the son of Nazareth. One of the men, totally perplexed, raises both his hands, while a younger man without a beard raises one hand, looking scared but defiant at the same time. In his other hand is an empty birdcage. From a larger cage near his feet, animals leap to freedom.

At the left side of the painting, two children, scared, seek the protection of Jesus’ disciples. One of them, holding a dove, looks like nothing but a pattern on the robe of the apostle due to the incomplete perspective. 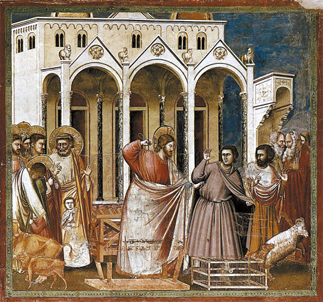 But the other child is unmistakably vivid, desperately holding the skirt of another of Jesus’s followers as the disciple tenderly holds the child’s shoulder. This is why Giotto is regarded as a forerunner of the Renaissance masters of Florence.

But what does the painting mean? Why are there cages and animals and why is Jesus making such a violent gesture, even frightening children? Actually, this painting is based on an episode that appears in all four Gospels, presented in John 2:13-16 as follows. 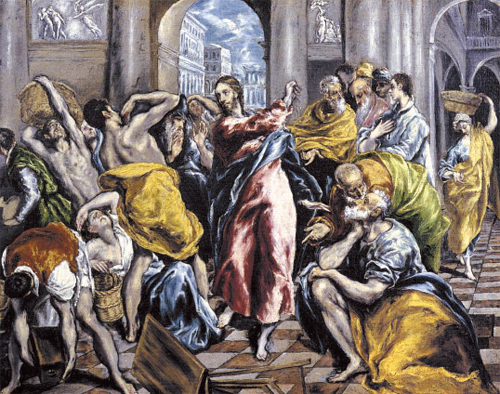 “And the Jews’ Passover was at hand, and Jesus went up to Jerusalem, and found in the temple those that sold oxen and sheep and doves, and the changers of money sitting: And when he had made a scourge of small cords, he drove them all out of the temple, and the sheep, and the oxen; and poured out the changers’ money, and overthrew the tables; and said unto them that sold doves, Take these things hence; make not my Father’s house an house of merchandise.” (King James Version)

Accordingly, the two men whom Christ glares fiercely at in Giotto’s painting could be a livestock seller and a money changer. But why is Jesus so furious at them? And why are there merchants and money changers in the sacred temple in the first place?

The answer can be found in some of the Jewish rituals described in the Old Testament. According to historians and theologians, Jews regularly sacrificed bulls, sheep or doves to the Lord at their temples. Pilgrims usually weren’t able to bring such animals with them on their long journeys, and even if they could, worshipers had to put their prospective sacrifices through a rigorous screening process, dictated by the criteria for burnt offerings laid out in Leviticus.

This led to the emergence of merchants who sold animals meeting these requirements in front of the temple. As their business prospered, more and more gathered and some of them even established themselves inside the complex.

As for the money changers, Jews participating in feasts including the Passover had to contribute money to the temple for its maintenance. Many Jews living outside Jerusalem had only foreign coins, but the temple refused to accept them as offerings. Accordingly, the currency exchange business in front of the temple became so prevalent that some money changers also settled themselves inside.

The problem was that, according to historians, these money changers frequently charged exorbitant fees for their services, and the oxen and sheep sellers also similarly overcharged visitors to the temple. Like ice cream sellers on the beach during summer vacation, the money changers and merchants were able to do so because they had a monopoly on the location.

Was there no competition among the merchants and money changers, which would have brought about a decline in the fees and animal prices? If there had been one merchant who declared, “I will offer a 20-percent discount for a male sheep without a blemish, which meets the strict criteria of Leviticus,” all the visitors to the temple would surely have rushed to him. That didn’t happen, which means the merchants and money changers must have formed some sort of a cartel, driving out those who broke ranks and keeping prices high.

But these businessmen couldn’t set up such an elaborate scheme inside the temple itself without the approval of its priests - the same group, coincidentally, that approved animals for burnt offerings.

So we can guess that the priests guaranteed the merchants’ and money changers’ business and at least turned a blind eye to the price-fixing, while sharing a portion of the profits in exchange.

Besides, you can go without an expensive ice cream on the beach but ancient Jews had no choice but to offer up an animal and a tithe (summer heat presumably being nothing compared to the eternal flames of hell). This, presumably, is why Jesus became angry.

If the painting were not specific to a certain religion, it would be very appropriate to decorate the headquarters of the Fair Trade Commission, whose first duty is to break monopolies and cartels.

The scene of Christ’s expulsion of the merchants and money changers was also a popular theme among Renaissance and Baroque artists. The unique Spanish painter El Greco (1541-1614), famous for his pale and longish human figures, made several paintings of the scene. And the Flemish painter Jacob Jordaens (1593-1678), who was heavily influenced by the Baroque master Peter Paul Rubens (1577-1640), also painted the episode.

The work by Jordaens is a typical Baroque-style historical painting, with a wide canvas and a spectacular tableau full of people and animals engaged in dynamic movement and reactions to one another. The livestock sellers are busy trying to avoid the lash of Christ, while some people at right watch as if enjoying the scene.

One man in the center particularly attracts the eye. Still sitting in his chair, he’s falling backward, screaming. Coins pour out everywhere beside him, while accounting books scatter, identifying him as a money changer.

Baroque painters frequently painted this scene for perhaps two reasons. The first is specific to the Barque era: The episode is dramatic and is accompanied by violent action, which was appealing to the tastes of the time. But the second will be familiar to anyone outraged by a bank bailout in the aftermath of last year’s financial crisis: Many of the painters just enjoyed having a good laugh at the financial elite.

In the 17th century and the time of Jesus, money changers were not just currency dealers but also offered comprehensive banking services. In particular, in 17th-century Flanders, where Jordaens lived, money changers were at the center of a major development of commerce and international trade in the region. Most of them also lent money as well, receiving interest in return.

It’s easy to see an undercurrent of anti-Semitism in this Christian schadenfreude - after all, the perfidious and inaccurate stereotype of the covetous Jewish financier persists to the present day - but it’s not clear to what extent it motivated these works.

At least we can say there remained a negative view of money lending in the Baroque period, so many painters reflected that in their work.

In two weeks, we will examine Europe’s centuries of often violent struggle with the business - or, as some called it, the sin - of lending with interest.