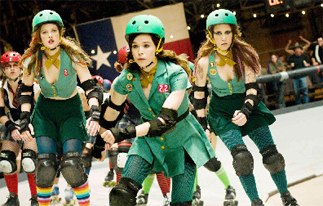 Ellen Page, center, gets tough as a roller derby rookie in “Whip It,” along with Drew Barrymore, left, and Kristen Wiig, right.

When I heard that actress Drew Barrymore was directing a movie, I was skeptical. Most of the movies she’s in - repetitive romantic comedies - do not compel me to the theater.

So I’m not that surprised to say that I enjoyed watching “Whip It,” Barrymore’s directorial debut. It’s about a sport that you’ve probably never seen in person or on a screen: roller derby, a contact sport consisting of skaters racing, and clobbering, each other around a rink, points being scored when a skater known as a “jammer” laps her opponents.

Originally popular at various intervals of the 20th century, it has undergone a resurgence in recent years in American cities with teams of scantily clad, ostentatiously named women like Maggie Mayhem, Bloody Holly and Eva Destruction.

Ellen Page of “Juno” fame plays Bliss, a high school student from small-town Texas no longer interested in pandering to her mother’s insistence that she participate in an insipid beauty pageant circuit. One night she and her best friend head to the city to take in the roller derby, and inspired by these saucy ladies and all the fun they’re having knocking each other down, the petite, unathletic Bliss decides to try out. Fortunately, her small frame helps her skate faster than anyone else, and she becomes a jammer for a team called the “Hurl Scouts.”

What follows is a classic sports underdog story with a lot of female bonding and other affairs of the heart. The Hurl Scouts are the worst in the league, but will the addition of Bliss - now a.k.a. Babe Ruthless - let them finally win a bout? Meanwhile, Bliss falls for a doe-eyed indie rocker (played by a real-life one, Langdon Pigg), but what’s going to happen when his band goes on tour? And just how long will Bliss be able to get away with keeping her secret life-on-wheels from her doting mother (Marcia Gay Harden)?

While a lot of this movie’s script probably wrote itself, Barrymore has helmed a film that does not badly fall victim to the pitfalls of sports cliches or trite emotional moments the way it could have. A solid supporting cast has Kristin Wiig and Juliette Lewis as other skaters, Alia Shawkat as the best friend, and Daniel Stern as the father. Barrymore herself also appears as a Hurl Scout. I’ve got to think her presence on both sides of the camera probably contributed to an on-set chemistry that made this movie as watchable as it is.