Dancing to a different tune at the palace gates

Dancing to a different tune at the palace gates 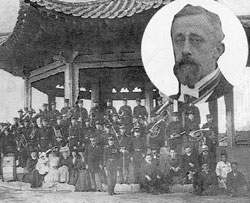 When action meets music, it becomes dance. Certain songs are associated with particular dances, so it would seem awkward to waltz to a Girls’ Generation jam. But the popular changing of the palace guards ceremony that has been held across Seoul in recent years hints of this dissonance.

Following the establishment of Byeolgigun ?? the first Westernized Korean army ?? in 1881, a trumpeter who was sent to study in Japan returned to Korea. He established a Western-style music band. That was the first attempt in Korean history to regulate soldiers’ motions with Western musical instruments.

After the foundation of the Korean Empire (1897-1910), the Korean Army adopted Western styles in every aspect of their organization, including uniforms, military drills and weapon systems. And with this Westernization, there was an increased demand for Western music.

Franz Eckert, a Prussian bandmaster, came to Korea with a variety of Western musical instruments for an orchestra of 50 players on Feb. 19, 1901. Before coming to Korea, he founded the military band of the Japanese Imperial Army and composed “Kimgayo,” the Japanese national anthem.

On arriving in Korea, Eckert began to teach Western instruments and scales to the Korean band members. The band gave its first concert in front of Emperor Gojong, ministers and diplomatic missions after six months of practice, and foreigners lavishly praised them for their accomplishments. Eckert composed the harmony for the national anthem of the Korean Empire, and the song was introduced as the official national anthem on Aug. 15 the following year.

The Korean government provided the military band with a building in the western corner of Tapgol Park in Seoul on June 12, 1902, and supported Eckert in his giving of music lessons. He trained the military band in this building, while holding a free concert at the octagonal pavilion named Palgakjeong every Thursday. The concerts were invaluable opportunities for Seoul residents to learn about and appreciate Western music.

Eckert resigned from his position as director of the band when the Korean military was dissolved in 1907. The military band he had trained was forcibly dissolved after Emperor Gojong’s death. Eckert’s top students organized a private band, but that group broke up in 1924.

Traces of their former glory can be found only at the nation’s largest market of Western musical instruments next to Tapgol Park.

This year marks the 100th anniversary of the forced annexation of Korea by Japan.

The palace changing of the guards ceremony at the gate of Deoksu Palace is currently accompanied by a traditional Korean music band. How about having a Western-style military band instead that resembles the one that Eckert trained so hard?

It would be a fitting memorial to the members of Eckert’s band and those like them who tried to resist Japanese imperialism more than a century ago.

The writer is a research professor at the Center for Hospital History and Culture at the Seoul National University Hospital.