A third plan for Sejong? ­

A third plan for Sejong? ­ 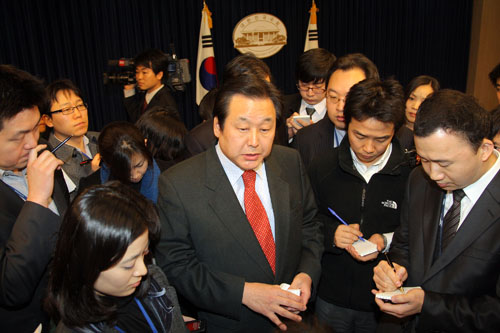 Reporters rain questions on Grand National Party lawmaker Kim Moo-sung yesterday at a press conference in the National Assembly. Kim, who has been considered a Park Geun-hye faction leader, proposed a compromise on the Sejong City plan, suggesting that independent state agencies should be relocated to the new city in addition to the business-science city plan Prime Minister Chung Un-chan had proposed. Political observers say Kim’s proposal sounds like a breakaway from Park, who is believed to be a leading candidate for the 2012 presidential election and who has been at odds with Lee over the Sejong plan. The independent agencies Kim referred to are the Supreme Court, the Constitutional Court, the National Election Commission, the National Human Rights Commission, the Board of Audit and Inspection, the Fair Trade Commission and the Anti-Corruption and Civil Rights Commission. [YONHAP]