Victorious thanks to a blade kick

Victorious thanks to a blade kick 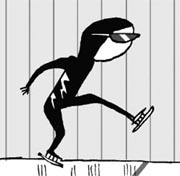 Kim Dong-sung won the gold medal in 1,000-meter short-track speedskating at the Nagano Winter Olympics in 1998. His secret weapon at those Games was a new finishing move called “blade-pushing,” where he shoved one edge of his skate forward at the very last minute. It was a technique that outsmarted other skaters in a situation where the color of the medal could change in just 0.01 second, the blink of an eye.

“By a hair’s breadth” literally means the difference of a single hair. If horse racing depends on whose nose crosses the finish, and skating depends on the whose blade makes it through, in track it’s all about the body.

The current Olympic regulations state that the order of finish depends not on the head, hand or foot, but whose torso touches the edge of the 5-centimeter finish line closest to the starting line. There are many different finishing moves to get there, including the “running finish,” where the athlete sprints across the line; the “lunge finish,” where the runner pushes out his or her chest; and the “shrug finish,” where the runner twists his or her shoulders. These are all types of “body kicks.” At the 2008 Beijing Olympics, Usain Bolt received glares for his relaxed finish. People knew he could have broken the 9.5-second barrier if he had just finished better.

Single luge is the fastest sport at the Olympics at more than 100 kilometers (62 miles) per hour. Georgian luger Nodar Kumaritashvili was killed in a practice run before the opening of this year’s Winter Olympics because he flew off the track on a high-speed curve and hit a pillar. The next fastest sport is downhill skiing at around 95 kilometers per hour.

With such great speeds involved, the Winter Olympics naturally require cutting-edge measuring equipment. Omega, the official record taker at Vancouver this year, has implemented a system that takes 2,000 photographs per second to measure the winner in ice sports.

The records appear the same up to one-hundredth of a second on the electronic display, but two-thousandths of a second can be deciphered through the photographs.

The satisfying new finish that has appeared in this situation is the “blade kick.” It is a method where the skater lifts his or her leg and pushes the blade forward. Canadian athletes were the first to do it. Lee Sang-hwa learned this method and won the gold medal by a difference of 0.05 second. The effect of the blade kick is very narrow - 0.03 to 0.04 second.

Skating and national affairs need a good finish. Can we not finish the tangled and twisted problems facing us with a blade kick?

*The writer is an editorial writer of the Joong-Ang Ilbo.