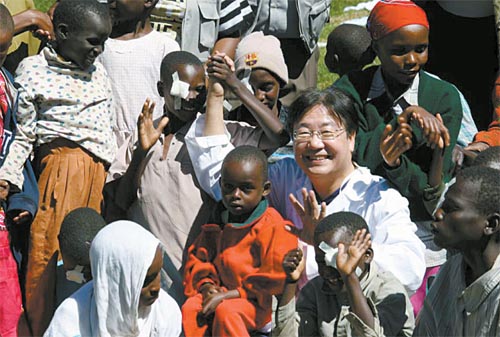 Dr. Joo Choun-ki, center, poses for a photo with some of the children he treated for congenital cataracts in Kenya in November. Provided by the Catholic University of Korea, Seoul St. Mary’s Hospital


Joo Choun-ki, 54, is the doctor who removed the eyes of the late Cardinal Stephen Kim Sou-hwan, one of Korea’s most beloved spiritual leaders, after his death on Feb. 16 last year. That one operation changed Joo’s life.

The doctor at the Catholic University of Korea’s St. Mary’s Hospital in southern Seoul had done some volunteer work in the past. Joo served the elderly in Catholic welfare centers in Eumseong, North Chungcheong, and Uiwang, Gyeonggi, every other day when his career was just beginning. He also went to Vietnam 10 years ago to provide free medical treatment. But that was all. Joo had never fully committed to a charity.

But after Kim’s death, he felt a compulsion to do so.

“I went to the operating room where the late cardinal was lying with three other young doctors at around 5 p.m.,” Joo said. “Kim seemed calm and peaceful. Even though I had carried out many eye surgeries over the last 23 years, I was so nervous.”

When he was alive, the cardinal had promised to donate his corneas upon his death, but Joo said he was concerned about whether that would be possible, since Kim was old and had previously received cataract surgery.

“I would have been deeply ashamed to see the cardinal if I could not transplant his corneas in someone else,” said Joo. “There was a 50-50 chance of accomplishing the surgery successfully. Fortunately, the operation was successful and two patients on the waiting list got transplants the next day.”

When he saw those patients recovering their eyesight, Joo said his whole outlook on life changed.

“I belatedly learned the lesson that real happiness comes when people share with one another. It was my gift from the cardinal,” he said.

In November, Joo visited Kenya as part of a volunteer medical service. That experience also had an impact on him.

“In Korea, doctors perform cataract operations under a general anesthesia. But I had no choice but to do the same surgery on 7-year-old Kenyan children under a local anesthetic,” the doctor said. “When the children cried out in pain or discomfort, other adults would hold their bodies tight. Medical facilities and tools were very poor.”

Despite the circumstances, Joo treated five kids who suffered from congenital cataracts. “I saw many children who did not get treatment and their parents weeping when I was about to leave the country. It was heartbreaking. This year I am planning to serve more people by visiting several other countries, including the Philippines and Mongolia,” he said.

There were only 97 cornea donors in 2008, but that figure rose to 183 last year, according to the state-run Korean Network for Organ Sharing. Konos also said that the number of people to benefit from cornea transplants increased from 207 to 395 in the same period.

“Since there are a small number of blood vessels within the eyeballs, a transplant operation is possible when corneas are extracted within 24 hours after death,” Joo said.

“But still there are not so many willing cornea donors.”