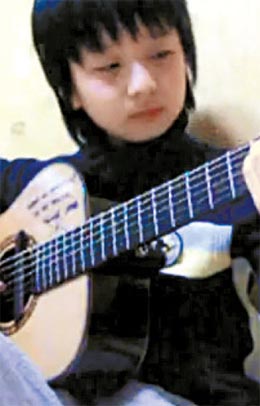 
The first Korean to hit over 100 million views on YouTube isn’t a famous celebrity, but a 14-year-old guitarist named Jung Sung-ha. He’s uploaded 240 video clips since his first in September 2006, and in the course of 42 months, he’s recorded a total of 110 million views - and still rising. That’s almost twice the amount major Korean management companies have been able to attract with official YouTube channels for their idol groups.

Sung-ha’s road to Web stardom began five years ago, when his father, Jung Woo-chang, began teaching him the guitar.

“I started to teach Sung-ha basic chords and accompaniment and found that he had a knack at playing ‘fingerstyle’ music,” Jung said, referring to plucking the guitar strings directly with the fingertips, fingernails or picks attached to the fingers.

The YouTube clips of Jung strumming away on a guitar as big as his own body have caught attention. World-renowned guitarists such as Tommy Emmanuel, Michel Haumont and Kotaro Oshio have already played with Jung.

Yoko Ono even left a comment on the clip of Jung playing the Beatles’ hit “All You Need is Love,” reading, “Thank you for a beautiful performance. John Lennon would have been happy that you performed his song so well.”

The prodigy took his career into the real world with a solo concert in Seoul in February 2009, and Jung has since performed at some of the world’s most prestigious venues, including Musikmesse Frankfurt in April and at the Thailand International Guitar Festival in October. Most recently, he finished a tour of five cities in the United States with Trace Bundy and began a six-day solo tour in Finland yesterday.

According to Jung’s official Web site, the guitar of choice for him is the finest model from the German manufacturing brand Lakewood, the A48CP. Jung secured a sponsorship by Lakewood in January 2009, but the market price for one of the guitars is around 2,800 euros ($3,800).

Lakewood specifically redesigned the model to fit the teenage guitarist’s small stature in a process that took four months.

A staffer who works close to Jung said, “Since it is a very expensive instrument, Jung takes extra care carrying it around during performances. The case itself is handmade, transported by one of his fans from America.”

“I’m happy and proud that people are enjoying what I like to do,” he said.