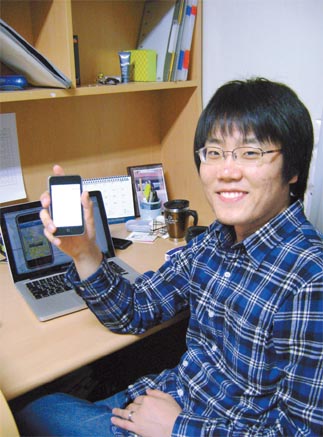 Right, Lee Jeong-yeol, a graduate student at the Korea Advanced Institute of Science and Technology, holds up a smartphone displaying an application, pictured above, he recently developed to help users find cheap gas prices. Provided by Kaist

Apple’s iPhone has made waves since its launch here several months ago, thrilling consumers and leaving local cellular manufacturers running to keep up.

The U.S.-based company’s Korean App Store - an online shop where users can get additional services for their iPhones - has become a hit as well. One of the site’s most popular features is a free application that allows users to pull up gas prices at nearby stations from their phones, a service that debuted here on Feb. 8.

The timing was perfect, as it came less than a week before the Lunar New Year holiday, when many Koreans pack up their cars and drive to other areas of the country to be with family.

The gas price gauge ranked as the most downloaded application at the App Store for three days, exciting drivers looking for the cheapest stations on their holiday trek. As of last Sunday, total downloads numbered 60,000.

The mastermind behind the application is Lee Jeong-yeol, a 25-year-old graduate student at the Korea Advanced Institute of Science and Technology. Lee, who studies electronics and is an expert computer programmer, said it only took him 10 days to create the application, though he then had to navigate through intellectual property rights issues. The application uses content provided by Opinet, a Web site run by the Korea National Oil Corp., and a GPS system.

Lee received help from the school’s App Center, which helped him speak with lawyers about intellectual property rights and send a letter to National Oil Corp. asking for its support.

The oil organization wasn’t happy, claiming it could not provide information gathered with taxpayer money for an application aimed at bringing in profits.

Lee spent some time reviewing his situation, citing the case of a high school student who developed a free application that provided bus information in Gyeonggi. Local officials charged that the application used public information without the consent of the government, and they forced the application to be removed from the site.

But after a huge public outcry, the Gyeonggi government made a public apology and allowed the service to continue.

In the end, Lee decided to provide the iPhone application for free.

He is now working on his second application. “I think there is still room for more new ideas,” Lee said.