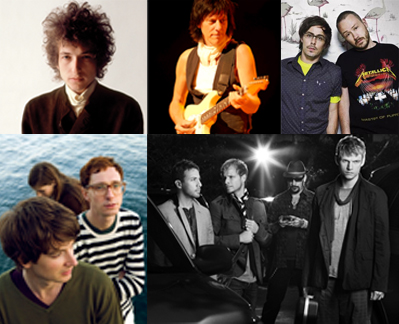 Earlier this month, news that Bob Dylan will perform in Seoul on March 31 totally rattled Korean music fans. After three frustrating years of false starts, the uncontested poet laureate of rock and roll is coming for his first, and possibly his only, concert here.

Talk of a Dylan concert in Seoul has been ceaseless since 2007, but the plans broke apart due to various issues including guaranteed fees. Ticket sales, which opened on Feb. 17, have been explosive among long-time fans aged between 30 and 50, according to Access Entertainment, a concert agency. Dozens of bloggers in awe of the legendary rocker have posted messages online, mostly like this one: “I can’t believe I will get to see Bob Dylan in Seoul.”

The addition of the 68-year-old American musician to Seoul’s music calendar makes an already eye-popping list of scheduled concerts in Korea even more impressive. Tomorrow, Chicago, one of the longest-running and most successful U.S. rock groups, is staging its second Seoul concert, and the next day, the Backstreet Boys, the American vocal group that started out as a popular boy band in 1993, is staging its third concert here.

This Saturday, Steelheart, a U.S. glam metal band, is making its way back to Seoul for the first time in 12 years. Despite its global reputation as a metal band, most Koreans identify it with a rock ballad, the mega-hit “She’s Gone,” one of the most popular numbers sung by Korean men in karaoke rooms. At a brief press conference in Seoul in December, Steelheart’s members pledged to play harder metal songs as well as some bluesy pieces on acoustic guitar and piano. The band has not performed in Korea since 1998.

On the same day, Basement Jaxx, a U.K. electronic house music duo, is set to spin tracks at one of the hottest clubs in Seoul, Club Eden at the Ritz Carlton Hotel, to promote their album “Scars.” The last time the DJs hit the Korean stage was at the 2009 Jisan Valley Rock Festival last July 25.

The duo - Simon Ratcliffe and Felix Burton - are behind some of Britain’s most popular progressive house anthems for their throbbing beats, voraciously sexy bass lines and infectious melodies. “Scars,” released last September worldwide, features their trademark dance tracks in collaboration with artists such as Yoko Ono, Santigold, Sam Sparro and Paloma Faith.

The list keeps going. Electric guitar legend Jeff Beck is playing in Seoul on March 20, followed by American R&B singer and composer Brian McKnight on April 1; Kings of Convenience, an indie folk-pop duo hailing from Norway, on April 4; and the Swell Season, a European musical duo, on April 7.

What’s behind the rush of foreign musicians into Seoul? Event organizers here point to a few factors. One is a fresh view of Korean audiences among the musicians themselves. “Musicians don’t pick a specific country until they gain confidence in the audience there. The accumulation of artists who have toured here give their successors the impression that this country is going to be okay,” said a spokeswoman at Access Entertainment, the agency behind Dylan’s Seoul concert.

The Access spokeswoman also mentioned Korean audiences’ “wild enthusiasm” for artists on stage. “Once they [overseas musicians] perform in Seoul, they get sort of addicted to the mood created by Korean audiences. So they come again and again, just as Oasis and Muse did,” she said.

A lifted guarantee burden thanks to support from large corporate sponsors is another key to the increased frequency of foreign artists’ visits here, according to Super Natural, the domestic concert agency that organized Whitney Houston’s Seoul concerts on Feb. 6 and 7. “World-famous stars like Whitney Houston demand roughly 1 billion won [$867,800] as a guarantee fee. It’s a huge amount for a single concert organizer to bear. But recent moves by corporate sponsors” - such as Hyundai Card - “to pay a sizable portion of guarantee costs has facilitated invitations to overseas superstars,” said Kim Ji-yeon, a spokeswoman for Super Natural.

Another company, Posco, Korea’s top steelmaker, has been sponsoring operas and classical concerts by overseas artists as part of its social responsibility efforts.

The spokeswoman for Super Natural says support from corporate sponsors has also dragged down ticket prices, which creates a “virtuous circle for concert organizers, artists and audiences.”

Music experts see momentum in the frequency of foreign musicians’ visits to Korea. “Korea’s live music market has grown so much it now ranks in the top 10 in the world. For overseas pop stars, Korea might now be more than worthwhile to visit,” said Im Zin-mo, a music critic.