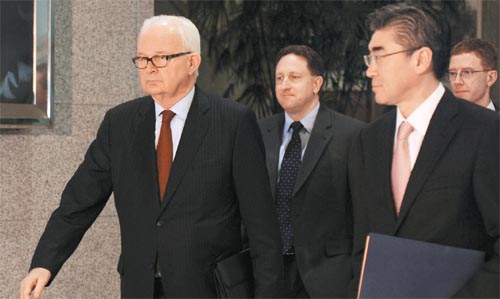 The meeting between Wi Sung-lac, Seoul’s chief envoy to the nuclear talks, and Bosworth came after their separate trips to Beijing this week for discussions on ways to resume the nuclear negotiations.

The special representative of U.S. President Barack Obama was accompanied by Washington’s chief envoy for the six-party talks, Sung Kim, right. Bosworth arrived here earlier yesterday and is set to leave for Tokyo after a two-day stay.

Shortly after arriving at Incheon International Airport, Bosworth said the U.S. is prepared to resume the six-party talks “in the very near future.” Before the meeting, Wi told reporters that South Korea is also prepared to hold talks at any time, but added there is still no sign that North Korea will return to the negotiating table in the near future. The talks, involving the two Koreas, China, Japan, Russia and the United States, were last held in December 2008. [NEWSIS]