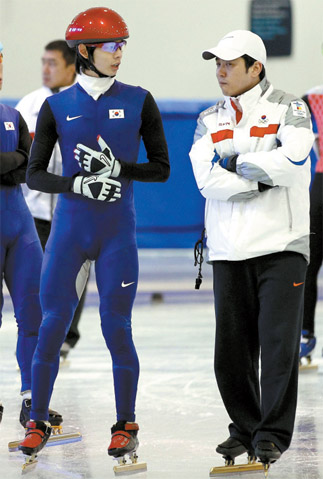 Lee Jung-su chats with a national team coach during a team practice at the Killarney Community Center in Vancouver yesterday. [YONHAP]

As the Korean men’s short-track speed skating team attempts to place first in all of their discipline’s events, their success rests on the shoulders of Lee Jung-su.

Having already won two gold medals in the 1,000- and 1,500-meter events, Lee is currently preparing with his teammates for Saturday morning’s men’s 5,000-meter relay.

Although Lee was crowned the champion of the 1,000-meter event on Sunday, the celebrations were short-lived as the 21-year-old refocused.

“What our team needs most is the gold in the 5,000-meter relay event. Sung Si-bak, Kwak Yoon-gy and Kim Seoung-il have not won medals yet and I will put in the extra effort for them,” Lee said in a phone interview after winning his second gold.

The men’s team has two events remaining at the Vancouver Winter Games: the 500-meter and the 5,000-meter relay. Korea is projected to have a solid chance to earn gold medals in both events. Sung is the top-ranked skater in the 500-meter race, considered the sprint event of short track. However, predicting the outcome is dicey and anything could happen on Saturday morning.

The relay requires unity and teamwork. A gold in the event is also significant in that all five skaters (four plus one substitute) receive benefits and can be excused from mandatory military service.

Before the Olympics began, the men’s team was confident of a shot at winning a gold medal in the relay. However, their teamwork came into question after Lee Ho-suk collided with Sung in the last turn of the 1,500-meter finals on Feb. 14. Korea not only lost out on silver and bronze medals, but many questioned whether excessive competition within the team caused a rift among its members. Furthermore, experts have voiced concerns about whether the incident caused the athletes to be excessively cautious during competition.

“I told my skaters to put our country ahead of individual goals. Our athletes understand this, and their teamwork is fine,” head coach Kim Ki-hoon said after the 1,000-meter finals.

Still, not everyone is convinced the men’s team has overcome the incident. “I studied the expressions and the manner in which Lee Ho-suk and Sung skated in the 1,000-meter finals, and I don’t think they have fully recovered from the shock of the collision during the 1,500-meter finals,” said Chun Lee-kyung, a former Olympic gold medalist and SBS short-track speed skating commentator.