Jong confident ahead of World Cup

Jong confident ahead of World Cup 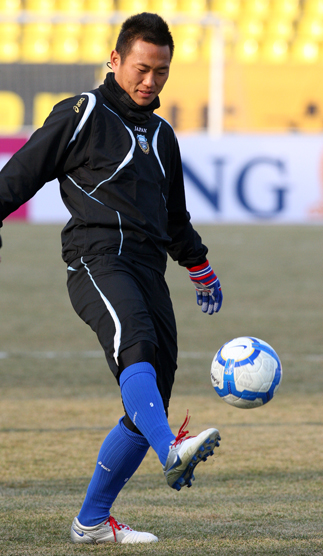 North Korean national and Kawasaki Frontale forward Jong Tae-se shoots from the hip. Preparing for his team’s AFC Champions League match against Seongnam Ilhwa Chunma tonight at 7 in Seongnam, Gyeonggi, the 26-year-old spoke confidently about his team’s chances at the World Cup in South Africa this June.

“Whichever game, if a forward is able to score a goal a game, he is a great forward,” stated Jong in an interview after a team practice on Monday. “If I can manage that feat at the World Cup, it could lead to favorable reviews from scouts around the world.”

Jong’s ambitious target of three goals in the group phase will not be an easy feat. North Korea has been included with Brazil, Portugal and Ivory Coast in what is being widely dubbed the “Group of Death.” Despite the daunting task of going up against some of the best teams from each region, Jong went on to state a goal for his whole team.

“We are included in a difficult group, but if we don’t believe in ourselves, we won’t win any games,” he explained. “We believe we can get past Portugal and survive the ‘Group of Death’ to advance to the next round.”

Jong relishes the chance to face such skilled players.

“I am excited about the possibility of facing Drogba because I think I have a similar style of play. Although his skill level is much higher than mine, I would like to play a superb game,” said Jong.

Jong is a third-generation Korean-Japanese - or zainichi, as they are referred to in Japan. He was born in Nagoya, Japan. After making a name for himself at Korea University, a post-secondary institution in Tokyo for supporters of the North Korean regime, he signed with the Kawasaki Frontale in 2006. Jong was selected to the North Korean national team in June of 2007 and has become the team’s most recognized player.

Having recently returned to his professional club after a monthlong training camp with the North Korean national team, Jong is looking forward to his first World Cup. He told the press he is learning Portuguese from a Kawasaki teammate so that he can communicate with Brazilian players in South Africa.

“We practiced strengthening our defense and maximizing our offense with a small number of players. Having qualified for the World Cup for the first time in 44 years, our players are showing a lot of focus in training sessions,” said Jong.

Led by coach Kim Jung-hoon, the North Korean squad is a defensive team that relies heavily on counterattacks. There have recently been rumors about a managerial change.

“I think Kim will continue to manage the team and I have not heard otherwise,” stated Jong.