Luck of the draw pits Kim against rival Asada

Luck of the draw pits Kim against rival Asada 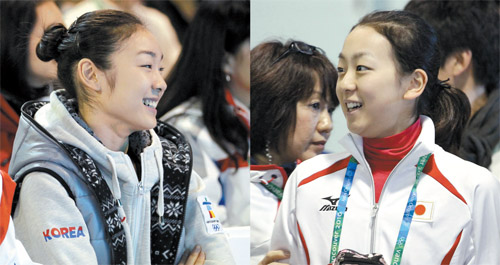 The much-awaited women’s figure skating event is near, and the draw for the short program held yesterday put Kim Yu-na rivalry with Mao Asada of Japan in the spotlight.

In lots drawn at the press conference room of the Pacific Coliseum yesterday morning, the 19-year-old was picked to compete in a group with Asada, Laura Lepisto of Finland, Alena Leonova of Russia and Akiko Suzuki of Japan in the women’s short program, starting at 9:30 a.m. tomorrow.

Kim is a strong favorite to win the gold medal in her Olympic debut, with Agence France-Presse going so far as to state that she is the biggest favorite since Peggy Fleming in 1968.

Kim and Asada will compete against each other for the first time since the 2009-10 International Skating Union Grand Prix season opener Trophee Eric Bompard in Paris last October. Kim went on to set the world record with a combined score of 210.03 points in the event while Asada finished second with a combined score of 173.99 points. Kim won all three events she entered this season including Skate America and the Grand Prix Final.

Asada, on the other hand, finished second at the Eric Bompard and fifth in Grand Prix Moscow before salvaging a win at the Four Continents Figure Skating Championships in Jeonju, North Jeolla last month with a season high of 183.06 combined points.

Kwak Min-jung, 16, will make her Olympic debut as the fourth skater in the second group.