U.S. ices its neighbor to the north

U.S. ices its neighbor to the north 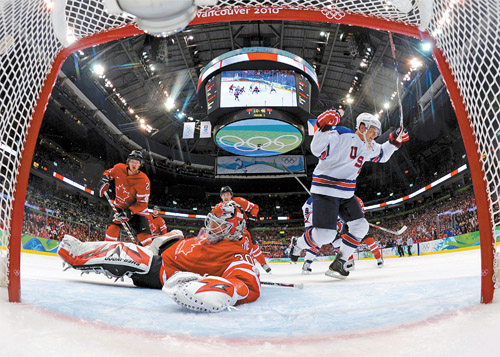 Brian Rafalski of the United States celebrates his goal against Canada in front of goalie Martin Brodeur in first period of their hockey game at the Vancouver 2010 Winter Olympics, Feb. 21. [REUTERS/ YONHAP]

VANCOUVER, British Columbia - Brian Rafalski scored two goals and Ryan Miller made 42 saves as the United States stunned gold medal favorites Canada 5-3 on Sunday for their first win over their neighbors in an Olympic Games clash in 50 years.

Forward Jamie Langenbrunner scored the winner in the second period for the Americans, who are a perfect 3-0. The team ended up with nine points and receive a bye into the quarterfinals. America’s last victory over Canada at an Olympics was at the 1960 Squaw Valley Games, when they clinched a 2-1 win.

“We had chances in the game, some hard chances. In the third period we had a lot of power plays but we just ran out of time,” said Canada superstar Sidney Crosby. “Ryan Miller was really solid and made some big saves. Sometimes you run into a hot goalie but we had some bad luck sometimes.”

Dany Heatley and Eric Staal scored for Canada, which suffered its first loss of the tournament after beating Norway and Switzerland its previous games. It looked like two separate games as the Canadians came charging out of the gate, outshooting the United States 19-6 in the first period, but they couldn’t get the puck past Miller, who was superb in goal for the Americans. Forward Dustin Brown’s goal late in the second period to make it 3-2 seemed to give the Americans a boost in confidence which they carried over into the third.

The game lived up to its billing as the teams traded end-to-end chances. In one sequence late in the second period Canada’s Joe Thornton raced down the right side on a break, but he was stopped and the Americans came right back with a breakaway by forward Bobby Ryan, who was in turn stopped by Brodeur.

After the loss, Canada coach Mike Babcock is looking at a change in goaltenders after Martin Brodeur, the all-time National Hockey League wins and saves leader, was torched Sunday for five goals. Brodeur made 18 saves but might get dropped in favor of Roberto Luongo, who won Canada’s opener and plays at the Olympic venue for the NHL Vancouver Canucks.

“I’ll watch the game tonight [on videotape] and make my decision,” Babcock said.

Brodeur set the NHL all-time wins and shutouts records this season, blanking Pittsburgh 4-0 for his 104th shutout in December, breaking the old mark he shared with 1950s and 1960s NHL legend Terry Sawchuk. Brodeur also surpassed countryman Patrick Roy for the most games played by a goaltender in NHL history with a 1,032nd career appearance in December, all with the New Jersey Devils over a 16-year career.

Meanwhile, the Big Red Machine got back in gear as Russia beat the Czech Republic 4-2. Evgeni Malkin scored twice and Viktor Kozlov and Pavel Datsyuk also counted to help the Russians bounce back from an upset loss to Slovakia and claim the top spot in Group B.

Louis Eriksson scored two power-play goals and defending champion Sweden earned a bye in the Vancouver Winter Olympic hockey quarterfinals with a 3-0 victory over Finland on Sunday. Despite the defeat, Finland also booked a place in the final eight as the top second-place team in round-robin group play, edging the Czech Republic on goal difference.