A prima ballerina returns to her home stage

A prima ballerina returns to her home stage 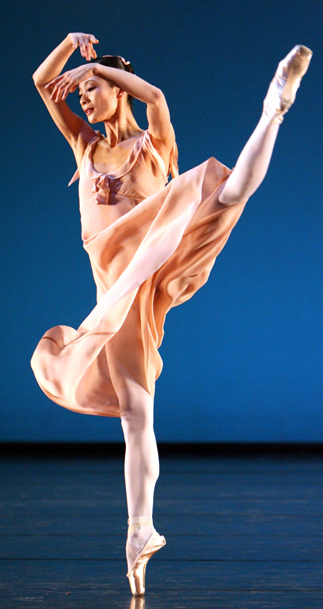 Seoul-born Kang Sue-jin is a principal dancer of Germany’s Stuttgart Ballet and has danced in the world’s top ballet troupe since 1986. But although the 42-year-old permanent resident of Stuttgart has spent more than half her life overseas, she never neglects her fans in home country.

She’s proving her devotion with a gala in April at the Seoul Arts Center. “The Ballet” will include performances in the classical and modern genres, and two domestic and world premiers in addition to the central pas de deux from noted ballets. The last time Kang took to the domestic stage was for “Romeo and Juliet” with the Stuttgart Ballet in November 2008, as the troupe toured Seoul for the first time in 14 years.

“The Ballet will be yet another challenge for Kang, who is over 40 and still dancing as prima ballerina. It will provide a rare chance to appreciate her history as a dancer,” said Credia, the organizer of the gala, in a release. Kang has been directly involved in planning for the gala, selecting the works and inviting cast members on her own, the company added.

During the two hour and 20 minute gala, she will dance highlights from “The Lady of the Camellias,” a three-act dramatic ballet based on Alexandre Dumas’ novel by the same name that later was adapted for Verdi’s opera “La Traviata.” She chose the piece because this year marks the 200th anniversary of Chopin’s birth and its choreographer, John Neumeier, used a selection of Chopin’s works to accompany the ballet. On a personal level, Kang won top prize with the role of Marguerite in the “Benois de la Danse,” a competition founded by the International Dance Association in Moscow that is among the most prestigious prizes for ballet dancers.

She will also present the domestic premier of Uwe Scholz’s Suite No. 2 with the West Australian Ballet, Australia’s first ballet company, and her fellow dancers from Stuttgart. Scholz, who died at the age of 46 in 2004, was a revered choreographer at the level of Vaslav Nijinsky and Pina Bausch. Kang will perform a pas de trios, a dance for three, with two male dancers, as well as a group dance to Rachmaninoff’s Second Suite for Two Pianos.

Known for her emotional and dramatic depth as well as for her technical brilliance, Kang ranks among the most distinguished female dancers in full-length ballets. She has deepened her dramatic abilities in a wide spectrum of roles in works ranging from “Romeo and Juliet” and “Onegin” to the comedic “The Taming of the Shrew.” She celebrated her 20th anniversary with the Stuttgart Ballet in 2007 and was named “Kammer Tanzerin,” a top honor for artistic achievement granted in Germany, the same year.