Paying the stork: the hidden costs of motherhood

Paying the stork: the hidden costs of motherhood 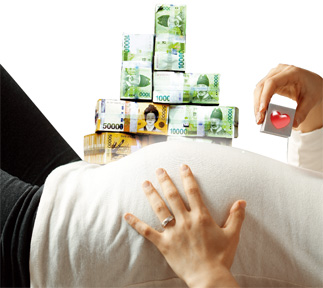 Last summer, I gave birth to my first child. Looking into my baby girl’s eyes for the first time was an indescribable experience.

I was also struck dumb by the long string of credit card bills that began coming in the months that followed. So I decided to sit down and work it out:

Just how much does it cost to give birth to and raise a baby as a working mom in Korea?

I started to crunch the numbers, collecting all the receipts and medical bills. As I added up the cost of checkups, delivery, vaccinations, baby formula, diapers and babysitting fees, I couldn’t help thinking that to have two or more children in Korea ought to be an indicator of fabulous wealth.

Experts agree that the economic burden certainly plays a factor in childbirth. In a Seoul Foundation of Women and Family survey in 2008, 70 percent of a group of 2,500 Seoul residents agreed that the cost of raising a child would be a major difficulty in starting a family.

After 39 weeks of pregnancy and seven months as a working mom, I have lived through those difficulties. And the challenges are still formidable despite nationwide government campaigns and continuous promises of benefits for new parents, aimed at increasing Korea’s fertility rate, which was the lowest among member countries of the Organization of Economic Cooperation and Development last year.

I’d been waiting for months to see those two red lines. They finally appeared on the pregnancy test early in the morning of Dec. 3, 2008, and I couldn’t have been happier. The expense of raising a child was the last thing on my mind - though I knew it would be significant. Little did I know my plunge into debt was about to begin.

During my 39-week pregnancy, I was required to go through 15 ultrasound tests and an additional 10 special, and expensive, examinations to tell whether the fetus was developing properly. When the nurse tried to sell me on a three-dimensional ultrasound, saying, “Aren’t you curious to see your baby’s face? You can even see the child yawning or frowning, it’s so cute,” I refused because it cost 70,000 won ($60).

My baby and I had no problems, and I wondered why I had to see my doctor more often than my friends in the Netherlands and Britain. 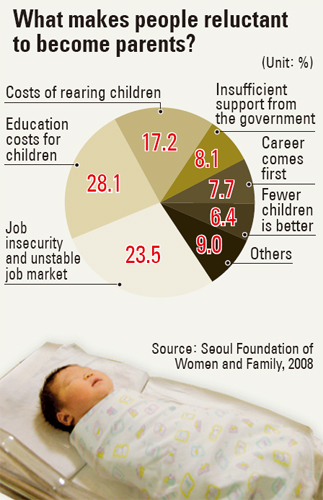 “I went to see a doctor three times and took two ultrasounds before reaching 20 weeks,” said Kim Key-hyun, who spent her early pregnancy in the Netherlands last year. At the same point in my pregnancy I’d been through six doctor’s visits and six ultrasounds.

In the United States, pregnant women also visit the doctor less often. Amanda Hall, senior communications specialist at the American College of Obstetricians and Gynecologists, said in an e-mail that, for mothers and babies who have no health problems, checkups are recommended every four weeks until 28 weeks, followed by one every two or three weeks from 28 to 36 weeks.

Some Korean doctors defend the more rigorous schedule. “In Korea, it’s far cheaper than other countries to receive ultrasound tests for some reason. Since it’s cheap, it is very accessible,” said Choi Anna, an obstetrician who runs the Ion Clinic in Donggyo-dong, Mapo District, central Seoul.

But the price of an ultrasound varies depending on the hospital.

According to a December episode of the MBC TV investigative program “No Consumer Complaints,” 40 clinics located across Seoul charge between 15,000 won and 145,000 won for a single look at one’s baby.

My little girl somehow got all turned around, and I needed a Caesarean section to prevent a breech birth. It turned out that in the government’s eyes this was a cardinal sin - one I would be punished for with vastly increased costs. 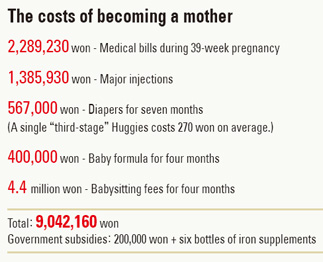 “Health insurance covers all the costs” when women deliver their babies the natural way, according to Shin Eun-kyung, an official in the health insurance division at the Ministry for Health, Welfare and Family Affairs. “All they have to pay is 50 percent for their meals.”

But women who choose or are forced to undergo a C-section are hit with the full cost of the surgery, the medication needed during recovery and more. The 50 percent discount on meals is small consolation.

I asked Shin whether the ministry was planning to offer more coverage for women who need C-sections due to a breech baby or other health complications. She simply replied, “There are no benefits for women who have C-sections.” 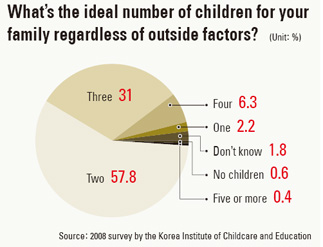 Combining doctor’s visits, ultrasounds, tests and the birth itself, I paid a 2,289,230 won ($1,996) toll to bring my baby into the world. The central government gave me a 200,000 won cash voucher, while Gangseo District, where I lived, gave me six bottles of iron supplements.

Other districts or counties offer cash between 100,000 won and 200,000 won for a first child. Some affluent districts even offer handsome subsides for those who give birth to third or fourth children. In Gangnam District, 10 million won is forked over for a fourth child.

“I want to move to the Gangnam area because I want more children,” said Choi Yu-jeong, 36, a working mom who raises two sons living in Eunpyeong District. “But the thing is, I have no money to purchase a house because it is way too expensive there.”

After my baby was born, I paid for all the necessities: vaccinations, baby formula, diapers and babysitting.

In the first six months, my baby received seven types of vaccinations in 18 doses. Some of them are free of charge at district health care centers, but pricier ones are not covered. For example, a single injection to prevent rotavirus infection - the most common cause of diarrhea among small children, which can lead to severe dehydration - costs 130,000 won.

When my baby was three months and 15 days old, I had to wean her off breast milk because my three months of maternity leave and one month of child care leave were drawing to an end. Formula shopping I went. The various choices sell for 18,000 to 60,000 won per tin, but I settled on a locally made one that costs about 25,000 won. My baby consumes four tins and 300 disposable diapers per month on average.

I found myself staying up after the baby had finally nodded off to search the Internet for the cheapest formula and diapers.

More desperate parents occasionally seen in news reports have been caught stealing baby formula or diapers from supermarkets. In response, the government started in February 2009 to offer tax exemptions on 10 percent of expenditures on diapers and baby formula, local or imported, but this is a negligible sum.

Worse, according to the Korea National Council of Consumer Organizations, local diaper and baby formula makers increased prices to offset the benefit - though industry representatives deny that charge.

“The last price increase was made in September 2008. It is different depending on each product, but prices rose by between 4 and 6 percent then,” said Cho Kyu-sik, vice head of the public relations team at Yuhan-Kimberly, the local manufacturer of Huggies diapers, which claims about 60 percent of the nation’s nappy market.

Getting a nanny was the hardest part as I went back to work. For a single baby, agencies charge between 1 million won and 1.3 million won per month. Nannies here work nine hours a day, but not on weekends or holidays. Go outside those nine weekday hours, and the price rockets upward.

To avoid some of these problems, I decided to send my baby to a public day care center. Money, of course, was an issue, but I also wasn’t sure I would be able to find a reliable nanny. So I put my baby’s name on a waiting list at a nearby public day care center in August, a month after she was born. Astonishingly, she was 72nd on the waiting list. Each year, only three babies earn the honor of admittance. Suddenly I understood why mothers rush to put their babies’ future names on these lists months before they are even born.

I ultimately sought out and hired a Korean babysitter, paying her 1.1 million per month and gradually grew terrified that I might upset her and she might leave.

My nightmare became reality late last month, when my babysitter said she wanted to quit. I managed to find another nanny - an accomplishment in itself - but my heart breaks when I see my baby, who just started to recognize faces, crying whenever she is cuddled by the new babysitter.

Over the past seven months, I have paid nearly 10 million won for prenatal health, the birth, formula, diapers and child care. And that doesn’t include other costs for nursing bottles, wipes, clothes, a car seat and a stroller. It’s now hard for me not to read the Health Ministry’s slogan to encourage more births - “One is lonely” - without a derisive laugh.

The state-run Korea Institute of Child Care and Education polled 2,078 households that started families in 2008. According to associate researcher Lee Jeong-lim, “In the survey, 57.8 percent said two children and 31 percent said three children would be the ideal number for their families.

The sad fact is that after going through all these hardships, mothers - many of whom don’t have the financial resources my husband and I enjoy - see a second child as a luxury they can’t afford.