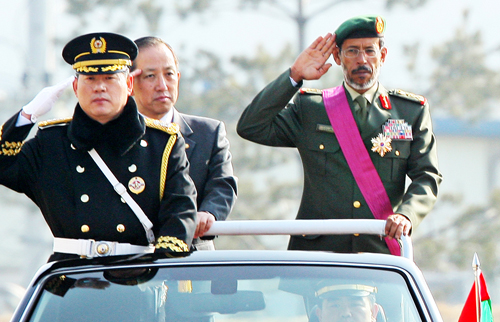 
In what may be a sign of deepening ties and increased leverage in trade with the United Arab Emirates, Korea offered U.A.E.’s top military officer an unprecedented warm welcome during his visit to Korea yesterday.

Lt. Gen. Hamad Mohammed Thani Al Rumaithi, chief of staff of the U.A.E. armed forces, has a position equivalent to Korea’s chairman of the joint chiefs of staff, but Korean Defense Minister Kim Tae-young came out to welcome Al Rumaithi.

The visit of the U.A.E. armed forces chief came after Korea won its bid to build four nuclear reactors worth $40 billion in the Middle East country last December.

The nuclear deal is Korea’s first to export nuclear reactors that will be designed, built and operated with the nation’s indigenous technologies.

Al Rumaithi reviewed an honor guard at the ministry in Seoul with an escort from Kim.

Kim may be providing such hospitality to Al Rumaithi because Kim himself received warm treatment when he accompanied President Lee Myung-bak on his visit to the U.A.E. late last year to give a push to winning the nuclear contract.

A defense official said the U.A.E.’s armed forces chief of staff is the person who holds the reigns of the country’s defense, rather than the defense minister.

Al Rumaithi arrived in Seoul with a delegation for a four-day visit on Monday. He and Kim discussed issues including ways to boost bilateral military ties through exchange visits of high-ranking officers, military training programs and weapons procurement.

Korea is also making an effort to export Korean-made weapons, including T-50 supersonic trainers, to the U.A.E.