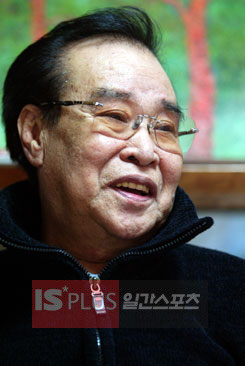 SEOUL, Feb. 23 (Yonhap) -- Bae Sam-ryong, one of South Korea's most beloved comedians throughout the 1960-70s renowned for his slapstick humor and trademark image as the fool, has died, his family said. He was 84.

Bae died early Tuesday after spending three years in the hospital when he was struck with pneumonia in 2007, his family said, adding his condition recently worsened to the point that he could not recognize those close to him.

Nicknamed "Bae the Weak" for his characterization of a helpless, weakly fool with outlandish facial expressions, Bae was by far the country's top comedian during the 1960-70s when the
country was under military rule.

Competition among TV stations to get him to appear on their shows was so intense that physical scuffles between producers were known to have occurred. "As I'm getting on a bus after
finishing a TV show, about 30 employees of a TV station abruptly surrounded me and tried to kidnap me," Bae once said during an interview.

Bae's fortunes turned abruptly in 1979 as the government was toppled by a military coup.

The ruling military junta banned him from appearing on TV, saying his comedy was damaging to "social morals and good manners." Bae later said in an interview that he believed the junta's ban was because he openly backed "one of the three Kims," referring to the three major politicians of the time -- Kim Dae-jung, Kim Yong-sam and Kim Jong-pil.

Following the ban, Bae headed to the United States where he spent three years.

He never regained his earlier popularity after returning home in 1983, however, and eventually started a series of businesses, all of which failed. Toward the end of his life Bae
struggled to pay for his hospital bills.

He is survived by a son and two daughters.