Justice comments on need for reason

Justice comments on need for reason 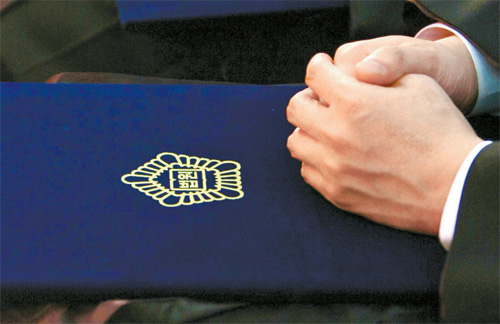 At the inauguration ceremony for newly appointed judges yesterday, a judge listens to Supreme Court Chief Justice Lee Yong-hoon’s speech with hands folded on top of the certificate of appointment. [YONHAP]

As controversy rages over alleged liberal bias within the judiciary, the nation’s highest justice urged newly appointed judges to rule based on their conscience, but a conscience that is rooted in logical reasoning and not personal preferences.

Supreme Court Chief Justice Lee Yong-hoon addressed 89 new judges in the auditorium of the court yesterday morning. It was the first time that Lee made a public speech since the judiciary came under heavy fire this winter for a series of alleged “left-leaning” verdicts.

“Conscience provides the yardstick for a trial judge, and it must be guaranteed with fairness and reason,” Lee said. “An unusual, unilateral decision of a judge that is unacceptable by other judges cannot be seen as conscience.”

“A standard that is not acceptable as a society’s norm must never be packaged as a judge’s conscience,” Lee continued, urging the judges to “seek the help of experts for the matters that they are not familiar with in order to achieve the universal validity.”

Lee also said all judges must be free from any outside pressure to protect the independence of the trial process.

“Lee appears to urge judges to examine themselves and act carefully in the aftermath of the latest controversy surrounding some verdicts,” a Supreme Court official said.

While concerns have risen over the political power wielded by liberal judges, Lee had in the past remained tight-lipped.

Lee appears to have taken into consideration some of the criticism as he addressed the newly appointed judges. His advice that judges should seek help from experts when considering unfamiliar subjects appears to be a reaction to the Korean Medical Association’s criticism of a Seoul Central District Court judge’s acquittal of MBC staffers who aired disputed 2008 “PD Diary” episodes about mad cow disease.

The group condemned the court for failing to seek advice from medical experts before ruling on the case, which involved questions about the health of cows portrayed in the show. The nation’s largest group of doctors said the judgment, therefore, included errors.

“Although Lee did not single out any specific cases, he surely indicated how the judiciary should react to the latest situation,” a senior official of the Supreme Court said.

Since his inauguration as the nation’s top justice in September 2005, Lee emphasized that judges must change to regain the people’s trust in the judiciary. When some judges were accused of corruption in 2006, Lee strongly urged them to correct internal wrongs.

When junior judges around the nation condemned Supreme Court Justice Shin Young-chul for allegedly interfering in their trials, Lee took their side. Rank-and-file judges said Shin had pressured judges under his supervision during trials of antigovernment protesters in 2008.

Last May, Lee reproached Shin for making “inappropriate” attempts to influence junior judges. The chief justice also pledged to defend the judiciary from outside pressure.

This has had an ironic result, some observers said.

The Shin episode brought about changes in the judiciary. The ability of senior judges to assign trials was curtailed to guarantee a trial judge’s independence.

This resulted in some junior judges handling some highly controversial cases. And many of those judges are seen as both inexperienced and liberal.

In an attempt to make up for the lack of administrative oversight, the Seoul Central District Court decided earlier this month to create four panels, composed of three or four veteran judges, to try high-profile or controversial criminal cases. The court also decided to only let judges with over 10 years experience on the bench preside alone over criminal trials.