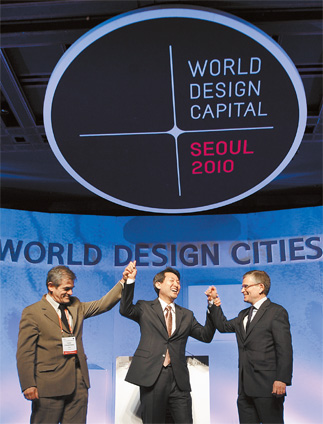 Matthias Horx, a renowned German futurist, thinks industry, services and design rank as some of the most important pillars of the economy.

It’s the last one he’s particularly interested in, saying during a forum in Seoul yesterday that countries must develop a “design mentality” in everything from architecture to urban planning going forward.

“The financial crisis showed the borders of the old growth model, which was based on production industries and the powers of the financial sector,” Horx said at the Grand Hyatt Hotel during his keynote speech at the WDC World Design Cities Summit. “These areas can’t generate wealth and prosperity or lead to growth and progress anymore.

“True design is not about building a new big, shiny house. It’s about letting people shine in and around their houses.”

Horx spoke in front of design experts, policy makers and government officials from around the world who have gathered in Seoul this week to share ideas about urban design.

The summit, hosted by the Seoul city government, started yesterday and wraps up today.

About 400 urban design experts and policy administrators from 31 cities in 17 countries are participating in the summit.

Seoul is the first official city to host the summit, after receiving the World Design Capital 2010 designation from the International Council of Societies of Industrial Design.

Seoul Mayor Oh Se-hoon said during the summit that local government officials are becoming more aware of the importance of design, which could spur phenomenal changes across the country. “A lot of people come up to me and ask why I place so much emphasis on design,” Oh said.

“I explain to them the value and power of design and the competitive edge it can give the city.”

“I hope that this summit will inspire the global network of community leaders that have gathered here in Seoul to gain a better understanding of design’s impact on urban competitiveness,” Breitenberg said.