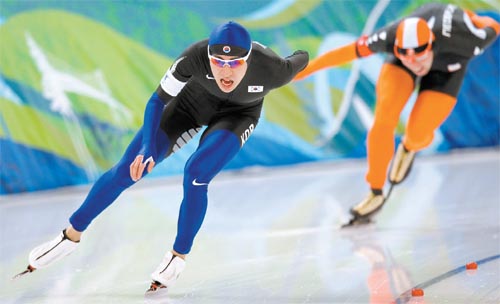 Lee Seung-hoon showed no signs of exhaustion as he pumped his arms for a final burst down the last stretch of the 10,000-meter speed skating race at the Richmond Olympic Oval yesterday. Lee finished the race a full lap ahead of Arjen van de Kieft of the Netherlands and clocked in at 30.29 seconds in the final lap. It was Lee’s fastest lap time of the race and considering the athletes must round the 400-meter oval 25 times, it was an impressive feat to say the least. Silver medalist Ivan Skobrev of Russia clocked in at 30.80 seconds in his final lap while bronze medalist Bob de Jong was timed at 30.47 seconds in his 25th.

“It is very rare for a skater to increase his speed in the latter stages of the 10,000-meter race,” explained SBS commentator Jae Gal Sung-ryol. “As an event which incorporates cardiovascular endurance and power, the body tends to stiffen in the latter stages of the race. The fact that Lee swung both his arms and sprinted down the final stretch means his lung capacity was far better than his peers’.”

Known to have the lung capacity of an Olympic marathon runner, Lee recorded 159 times in a Korea National Sport University’s shuttle run test, which measures an athlete’s ability to accelerate between marked lines set 20 meters apart. Most of his peers at KNSU recorded an average of 140, and most long-distance runners score an average of 141.65. 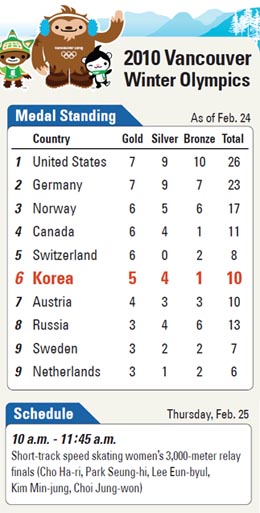 While a strong lower body is the base for any skater, the speed skating event requires powerful arms as well.

“In speed skating, it is important for skaters to incorporate arm movements into their strides. As skaters swing their arms in full strength, the power transfers to the legs and results in powerful strides,” said Yoon Sung-wong, a researcher at the Korea Institute of Sports Science.

There is also a difference between sprint and long-distance events in speed skating. While sprint skaters need a burst of power over a short time, it is imperative for long-distance skaters like Lee to pace themselves throughout a race. These skaters expend 85 percent of their full capability throughout the race in order to maintain their pace. Competitors skate down the straightway with one arm behind their backs and often use just one arm when increasing their speed. The preserved energy is used in the final stretch, when skaters use both their arms.

The speed skating 5,000-meter race was a preview of things to come. Lee was able to earn a surprise silver in that event, with a strong time down the final stretch.

“Lee’s spurt drove me crazy,” stated Sven Kramer, the Dutch skater who took the gold in that race. “If I had competed after Lee, I would have failed to win the gold due to the pressure.”

“It is safe to say that there is no spurt in the latter stages of the 10,000-meter race. Skaters need to pace themselves,” stated Yoon.