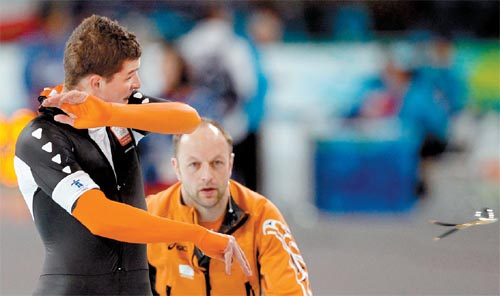 The Netherlands’ Sven Kramer throws his glasses away after being disqualified for failing to switch a lane during the men’s 10,000 meter speed skating race in Vancouver on Feb. 23. At right is his coach Gerard Kemkers. [AP]


RICHMOND, British Columbia - If ever there was a blunder of Olympian proportions, this was it. Sven Kramer lost the Olympic gold medal Tuesday when coach Gerard Kemkers sent him the wrong way on a changeover during the 25 laps of the 10,000-meter speed skating race - a mistake so elementary, it defies belief.

“It is a disastrous error,’’ said Kemkers, still in shock because his faulty instructions had Kramer disqualified and moved Lee Seung-hoon of South Korea from silver to gold. Kramer had not lost a 10,000 in three years, making him the prohibitive favorite to win - until the inexplicable happened.

Every lap, a skater moves from the outside lane to the inside lane, or vice versa, for to make sure everybody skates the same distance. Almost never is there a problem. But sometimes a skater can get so focused on style and pace that the mind becomes blurred.

“It is a mental fight for 25 laps,’’ said defending champion Bob de Jong, who won bronze because of Kramer’s disqualification. “Sometimes you’re coming out and looking for good ice, you might go either tight on the track or wide on the track to get better ice. And it’s at that time you think - ‘OK, where did I just come from?’”

That is why there’s a coach there to help him.

“This is unprecedented in an Olympic Games,’’ United States coach Derek Parra said.

This time, though, it wasn’t the athlete - it was his trackside coach who was confused. Kemkers was busy writing “Difference Lee 29’’ - speed skating code to show how Kramer’s race was progressing - when, in a split second, he lost his way. He looked up, didn’t realize that Kramer had already moved outside, and thought his skater had to move inside instead. Not convinced, he looked back and saw skater Ivan Skobrev, who had cut inside early in the changeover, and presumed the Russian had to move outside. Wrong again.

With Kramer approaching the red cone at the end of the changeover, Kemkers desperately pointed him inside while Kramer was making the right decision to move to the outside.

The years of trust between coach and skater convinced Kramer to move inside. With one leg over the cone, he cut the corner. Suddenly, Kemkers realized that Skobrev was now in the same lane, and despair descended.

Kramer still had his arms outstretched in victory when he crossed the line, 4.05 seconds ahead of Lee’s Olympic record of 12 minutes, 58.55 seconds.