[Viewpoint] Tangled up in the technology web

[Viewpoint] Tangled up in the technology web 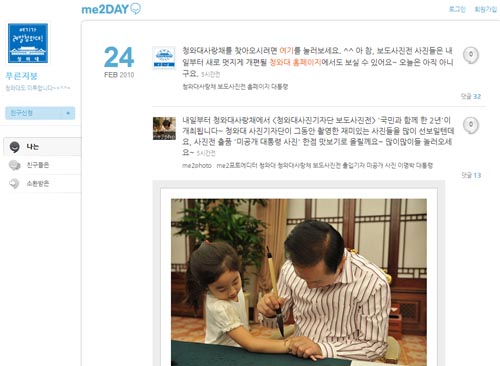 The Blue House has opened a page on the Korean version of Twitter at http://me2day.net/theBlueHouse.

Paper and pen are relatively easy to use. The Internet and keyboard are more difficult.

I prefer using paper and pen, but I had no choice but to become an Internet user. The world changed.

Now, the world is going mobile. Just having a mobile phone was once enough, but in this day and age everyone is rushing out to buy smartphones.

This is a problem for what I like to call “IT-phobes.”

We live in an age of cutting-edge information technology that evolves at the speed of light. It’s an odd dynamic, as the concepts of freedom and restraint often overlap. You can surf a network of infinite information but cannot break away from the spiderweb-like Internet.

And it’s not just individuals who are tangled up. The legal system is faring even worse.

Twitter is a social network service where members can exchange information in 140 characters or less, free of charge. It is famous for having largely helped the election campaign of U.S. President Barack Obama. You can disseminate information through Twitter faster than other platforms including TV and most Web sites. Anyone who registers as a “follower” of a certain person can get updates by the individual in real time through a mobile device.

It became a topic of heated debate when the National Election Commission included Twitter as something that it can monitor. Election guidelines distributed on Feb. 22 stipulate that Twitter is “a method that merges Web sites with e-mail.” Therefore, it is considered a form of communication that must be overseen when it comes to elections, just like e-mail.

The commission attempted to become followers of 672 people on Twitter, mostly politicians. In actual fact, they are not people it wants to follow, but rather those it wants to control.

“It is a violation of expression that reminds me of long hair and miniskirt control in the past,” one politician said.

The real intent of the election law is to “free words and tie up money.” The goal, in other words, is to guarantee communication - a key to democracy - while addressing cost factors that differentiate information distribution.

This is why reasoning behind the regulation. According to the laws, “appointment papers, election posters, photographs, printed material, recorded voice or video material and other similar objects may not be distributed, scattered, shown or posted.” E-mail and Twitter have been included in “other similar objects.”

All debates aside, I wonder if this type of control is realistically possible.

Perhaps it might be possible if all connections are blocked, like in China. But you don’t need to confirm your real name to use Twitter, and anyone can register with an e-mail address.

There is no knowing how effective Twitter will be for election campaigns.

More than 8,630 people are “followers” of Democratic Party presidential candidate Chung Dong-young, who said he would file a constitutional appeal if the law is not revised. This is less than the 13,752 followers of politician Sim Sang-jeong.

Needless to say, both numbers are paltry compared to the 87,260 followers of figure skater Kim Yu-na. On top of that, the number of people Chung Dong-young and Sim Sang-jeong follow is higher than the number of individuals following them on Twitter.

This indicates that they have more “intentional” relationships than “voluntary” ones. Kim Yu-na is only a follower of seven people. Therefore, the analysis that Twitter could be used to promote an agenda is quite persuasive.

Meanwhile, there are divided opinions not only in the National Assembly but also in the judicial world on deep packet inspection., which involves examining Internet activity.

The serious issue revolving around Twitter and deep packet inspection is that they both have constitutional problems. Last year, five judges of the constitutional court presented the opinion that the phrase “other similar objects” in the public official election law is “against the rule of clarity and the rule of no overprotection of basic rights.”

However, it did not reach the quorum necessary - six votes - to deem it a violation of the constitution. In addition, the legal world points out that deep packet inspection also violates the constitutional regulation that “communication secrets of all people shall not be violated.” Therefore, the law needs to be corrected.