The headlines on two of Hwang Myeong-eun’s advertisements read, “The mother who leaves in the morning,” left, and “I am a bad woman,” right.

So read a recent full-page advertisement in a local free publication. The name of the mother - which didn’t appear in the ad - was Hwang Myeong-eun.

Describing another hectic day at work, her ad continued, “I may be a good employee, but to my family, I am a failure. In their eyes, I am a bad daughter-in-law, a bad parent, a bad wife and a bad mother. Do the benefits of working rationalize carrying all these labels?”

When it first came out advertising executives thought the series was just another clever ploy - a “teaser” - to develop interest in some product. But in fact Hwang is a real Korean mother, struggling to balance family life with work in a culture that demands absolute commitment to the office. She happens to be the chief financial officer at an advertising firm, but she paid for the message herself.

As a working mom in a society with deep-running Confucian roots, Hwang struck a chord with many other women in Korea, where often the onus falls on the male to bring home the samgyeopsal. With Dad tied to long hours at work and heavy drinking sessions for networking afterward, moms are often left to raise the kids. This difficult task can become next to impossible if mom works. More Korean women are beginning to hold down jobs amid difficult economic times, but the division of domestic labor remains the same, so they’re faced with taking care of the children’s socialization and education along with jobs frequently just as demanding as their husbands’.

As a high-ranking executive for a midsize advertising company, Hwang ought to be a role model for working women. Coming from a family with six siblings, Hwang is the only one with a college education. She has spent 25 years in the business world, and at 38 years old she makes slightly more than 100 million won ($86,000) a year - roughly twice her husband’s salary. Considering that Korea has the biggest wage gap between the genders in the developed world according to the OECD, Hwang has achieved what many working females can only dream of, yet she said she too often finds herself heartbroken, trying to juggle work and family. And she said she’s aware that for many women, things are even worse.

“I know I am lucky because I make a lot of money, but even for me it’s very tough, and I can only image how hard it would be for women who are the single breadwinner for their families or who make much less than I do,” said Hwang, who paid roughly 10 million won for the ads.

Hwang is the perfect example of a generation now seeking to carve out its niche in a society still heavily influenced by Confucian gender roles.

“One would think that with time things would improve, but actually it has gotten worse. Korean working females now have to be good mothers, daughters-in-law and wives at the same time. If you fall short in any of those categories you are deemed a failure,” said Professor Yu Gye-suk, a specialist in child care at Kyung Hee University. 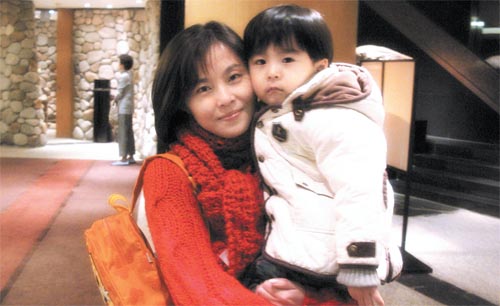 Hwang Myeong-eun is the chief financial officer at a midsized advertising firm, and a mother of one. She placed ads in local publications describing the problems she faces juggling work and family - problems common to many working Korean women. Provided by Hwang Myeong-eun

Needless to say, it took sacrifices for Hwang to get close to the upper rungs of the corporate ladder. After her three months of maternal leave, she opted not to take a year of child care leave, even though her contract said she could.

“I was afraid that I wouldn’t get my job back,” she said with a simple shrug. On top of an average of two to three meetings a day with clients such as SK Telecom, Hwang also has to take care of rituals honoring the ancestors of her husband’s family, which involve 100 relatives and take place 10 times a year.

Realizing that Korea shows many of the signs exhibited by Japan before its infamous “lost decade” - particularly a low birthrate with an aging population - the Lee Myung-bak administration has tried to implement new measures to attract foreign talent and increase the size of families. Parents who have three or more children are given special interest rates on their mortgages, and the government is scheduled to provide couples undergoing artificial insemination 1.5 million won each for up to three tries.

Nevertheless, Professor Yu said, effective change can only come from a coherent approach that includes the government, corporations and individual families. “Companies want to have tax breaks, and that’s the bottom line,” said the professor. “Without any meaningful subsidies, companies won’t consider [new policies], because implementing all that leave means a company has to put up money to hire a replacement.”

The government has tried to create better conditions for working mothers, but it’s hard to break cultural norms. The law now dictates that workers can take up to one year of child care leave, but peer pressure at work makes this virtually impossible despite legal guarantees.

Lim Sae-young, an official with the Labor Ministry, admits that there are loopholes in the law that are hard to fix. “Unless a worker officially puts in a request for child care leave, you can’t sue the employer. This means if you voluntarily choose not to request child care leave there is little the government can do.

“You have to take advantage of the law,” the official stressed.

But for most working mothers here that’s easier said than done. “I know my rights. But I know what will happen to my job if I try to take full advantage of the law. All of my co-workers who were pregnant took the absolute minimum amount of leave,” said a female employee at Samsung Electronics who asked to be called Jeong. “Nobody wants to rock the boat.”

Statistics show women across the country have been caught in similar dilemmas since the implementation of the child care leave law in 2001. In 2002, a total of 3,762 people took paid child care leave, according to the Labor Ministry. Last year, that number had risen, but to just 35,400 - insignificant in a country with a population of roughly 50 million, where 440,000 babies were born the same year.

For a country that is aging faster than any other, experts have long warned that the low birthrate is bound to be a problem in the near future. Last year, there were 1.89 million Koreans aged 75 or older, accounting for 3.9 percent of the nation’s total population. That’s up from up from just 100,000 in 1960. Meanwhile, 14 percent of the nation’s population is 65 years or older.

According to the state-run Statistics Korea, the fertility rate, or the average number of babies born to each woman between the ages of 15 and 49, stood at 1.19 in 2008, the lowest among OECD member countries. Neighboring Japan, which has also been plagued by similar problems, still has a higher one at 1.37, while the United States and France have rates of 2.12 and 1.99, respectively.

While Korea has long taken pride in its people’s relentless work ethic, its spending on social welfare remains less than half that of other advanced countries, indicating the sector has not kept pace with Korea’s tremendous economic growth. A study published by the Korea Institute for Health and Social Affairs showed that the country’s total spending on social welfare was 112.1 trillion won in 2008 - about 10.9 percent of the gross domestic product. The average for OECD member countries in that category is 23.7 percent of GDP. The study also showed that the government contributed only 8.3 percent of welfare spending.

The social effects of the low birthrate and aging society are now revealing themselves. The Defense Ministry estimates that the number of healthy men to turn 20 in Korea in a given year will peak at 328,000 in 2012, but drop to 248,000 by 2021. Thus, the ministry has been playing with the idea of reducing the country’s mandatory military service by two to three months from the present 24 to get young men out into the workplace earlier. Meanwhile, in October last year, two elementary schools in the Gangnam area were forced to consolidate due to a shrinking student population in the first merger of its kind here.

In a country where virtually every child (99 percent) is born to a married couple, the younger generation is showing reluctance to get married and have kids because of staggering private education costs. In a survey by the Maeil Economic Daily, 50 percent of 2,453 married people said they regretted having children due to the costs. For the same reason, 47 percent said they were not thinking of having another child.

The government is taking desperate measures to counter the problem. In October 2009, the Health Ministry announced that one Wednesday a month it would not pay workers for overtime and that it would turn off the lights at 7:30 p.m. to encourage workers to go home and spend time with their families. The policy follows a long line of changes the ministry has tried since 2007 to get its workers to go home on designated Wednesdays.

Yet most experts agree that any new policy designed to fix the low birthrate has to be backed up by a general shift in social attitudes toward working moms.

“When it comes to raising a child, it was mostly the individual that was seen as bearing the responsibility. There should be a realization that it’s the nation now that has to help individuals because socioeconomic changes have made raising a child very difficult,” said Shin Yun-jeong, a researcher at the Korea Institute for Health and Social Affairs. While analysts argue that different forms of financial aid are needed as families in different income brackets have different needs, a wider introduction of flexible working hours and greater availability of child care centers is seen as crucial to raising the country’s productivity and growth potential.

But above all, said Kim Hye-won, a researcher at the Korea Labor Institute, “I think what working moms here are asking for is just a helping hand so that they can reconcile work and family life. They are not talking about shirking their responsibilities as mothers. They simply want more understanding and acknowledgement that they need some help.

“It’s a shift of mentality they are looking for, which is by far the most important thing.”