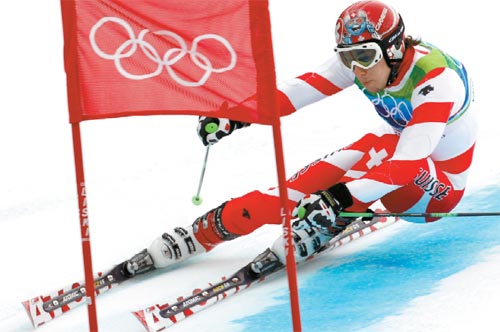 Switzerland’s Carlo Janka passes a gate during the first run of the Men’s giant slalom, at the Vancouver 2010 Olympics in Whistler, Canada, Feb. 23. [AP/YONHAP]

“It was perfect for me, the snow was hard but not icy, good grip, perfect conditions,” Janka said of the Dave Murray course.

“You must always take a lot of risks. I made no big mistakes from top to finish and that was key today.”

Jansrud, who finished a distant 31st in the downhill and 12th in the super-G, said he had been resigned to being knocked off the podium. The wait “wasn’t as exciting as I thought it would be because I thought more would come in ahead of me. When Aksel came down and was losing time, my heart started racing.”

Svindal, whose additional bronze brings him level with Miller’s three-medal achievement, added: “In the giant slalom I was hoping I wasn’t going to get fourth. I knew Kjetil skied extremely well, so I wasn’t surprised to see him ahead of me.” Svindal won giant slalom gold in the world championships in 2007 after finishing sixth in the Turin Olympics.

“It’s cool,” he said of Norway’s medal showing of one gold, two silver and one bronze. “We’re a close team, with small resources. It’s going to get even better.”

It could hardly have gotten worse for Miller, who skied out in his bid to win a record fourth alpine skiing medal at one Olympics. The American, starting with bib number 31, looked decidedly ragged in the top third of the first leg and when he tried to push the pace he lost an edge and momentum around a series of tight gates.

The 32-year-old claimed gold in the super-combined, silver in the super-G and downhill bronze as part of a US team that had taken eight of 18 medals on offer here before Tuesday’s race. There was also woe for the Austrian men’s team, which remains without a medal with just one event - the slalom - to race. Marcel Hirscher, Romed Baumann and Benjamin Raich, the defending Olympic champion and world silver medalist, finished in fourth, fifth and sixth place.

“I just made too many mistakes,” Ligety said. “Of all the guys on the team, I should have been getting a medal.”