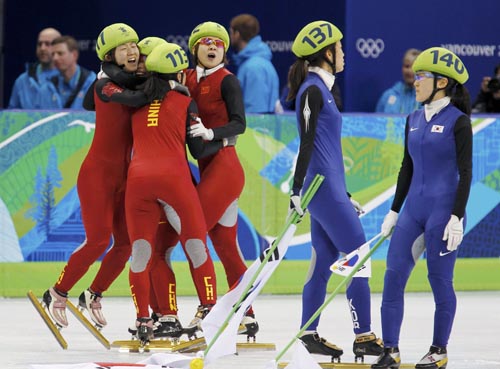 
A controversial ruling in the women’s 3,000-meter relay event has the Korean squad crying foul.

The Korean women’s relay team failed to win their fifth consecutive gold medal in the event after being disqualified yesterday at the Pacific Coliseum in Vancouver.

To add insult to injury, the chief official involved was the same one who took a gold medal away from a Korean skater in 2002.

The Korean team crossed the finish line first and was ready to celebrate with Korean flags in tow when the officiating crew took several minutes to deliberate. Officials then disqualified the team for coming in contact with a Chinese skater with five laps to go in the race.

China ended up taking the gold medal with a world record time, while Canada won the silver and the United States the bronze.

For Korean skaters, smiles and jubilation immediately turned to tears as they were dumbfounded by the ruling. “I don’t know why such a ruling was handed down,” said distraught team member Park Seung-hi. “I can’t find anything wrong with our race today.”

Kim Min-jung had entered the race after a handoff with five laps to go and was in a tight race with China’s Sun Linlin. In the ensuing turn, Kim’s left skate blade made contact with Sun’s right skate. Many thought the contact did not look intentional nor the type of incident that warranted disqualification. But Sun did lose speed due to the contact and the officials deemed the contact illegal.

“Kim Min-jung was leading the race and was the first to make the turn,” said former short-track gold medalist and SBS commentator Chun Lee-kyung.

“Since Sun was in pursuit, there was nothing wrong with the contact. Considering the officials took several minutes to review the video replay it seems they weren’t sure of the ruling themselves ... It’s like a rerun of the Kim Dong-sung incident.”

Chun was referring to the 2002 Salt Lake City Winter Games when Korean skater Kim crossed the finish line ahead of American skater Apolo Anton Ohno. However, officials ruled Kim illegally blocked Ohno during the race and disqualified the Korean skater. The chief official of the race was James Hewish of Australia, who also acted as the chief official at yesterday’s women’s relay event. The involvement of Hewish and a controversial disqualification already had many Korean fans in an uproar on various Web sites.

Korea will look to salvage a gold medal in the women’s 1,000-meter short-track event. Park Seung-hi posted the best time in her heat, crossing the finish line in 1 minute 31.885 seconds. Cho Ha-ri also finished atop her heat with the time of 1 minute 35.953 seconds.

In the men’s speed skating 500-meter event, all three skaters, Sung Si-bak, Lee Ho-suk and Kwak Yoon-gy, qualified at the top of their heats for tomorrow’s quarterfinals.