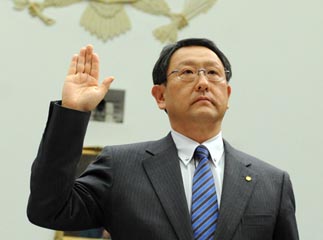 Akio Toyoda, grandson of Toyota Motor’s founder and its current CEO, testifies on Feb. 24 during a U.S. House of Representatives Committee on Oversight and Government Reform hearing. [YONHAP]

The recall of around 10 million vehicles since the end of last year by Toyota Motor Corporation, a name once synonymous with quality, is shocking. With policies for excess cost reduction and expansion of offshore work sites being blamed, warnings are growing about the risks of globalized production.

Corporate moves overseas have mushroomed since the 1980s, beginning with American and Japanese companies, and delivered many gains, including improved price competitiveness, indirect bypassing of trade barriers, stronger adaptability to local markets and avoidance of currency exchange rate losses. However, the relocation of production bases and diversification of supply chains also carry risks such as loss of tacit knowledge, insufficient management of inventory and quality and technology leakage.

Korean companies have increasingly employed global production systems since 2000 to cut costs and make inroads into overseas markets. While it is necessary to bolster competitiveness by expanding global production, it is also crucial to analyze the possible risks related to quality decline and core technology outflow and formulate pre-emptive countermeasures.

Based on origin and domain, there are five types of risks that can stem from building a global production network. The first is faulty quality at overseas factories. It is difficult to find and develop skilled labor at overseas plants while transplanting the quality management system used at headquarters, so a drastic expansion of overseas plants can cause even more difficulty.

The second risk is poor-quality products coming from overseas parts suppliers. It may be difficult to develop a close, cooperative relationship with overseas suppliers, and that can hinder continuous quality improvement or get in the way of easy identification of the flaws.

Add to this the pressure of excess cost cuts on suppliers, and the quality of parts can deteriorate further. For example, faced with sales plunges in 2003 and 2004, Nokia shifted its strategy and tapped into emerging markets like China and India, while expanding production of low-priced mobile phones. To do so, the Finnish company demanded low prices from overseas parts suppliers, and that eventually led to poor quality control. Consequently, Nokia in 2007 recalled 46 million batteries for mobile phones that Matsushita Electric (now Panasonic) had supplied, and in 2009 recalled 14 million mobile phone battery chargers manufactured by China’s BYD.

The third risk is the loss of proprietary technology to overseas rivals. This occurs when core technology is transferred to overseas plants. It is facilitated by personnel changing jobs, since management of human resources is more difficult in overseas plants compared to domestic operations. Honda Motorcycles started production in China in the 1980s and was successful until the mid-1990s, but its market share plunged thereafter as local companies introduced Honda look-alike models. It was found that design blueprints and technology had been leaked from Honda’s China plant, and the company failed to address the fact that counterfeiting is easy in China due to lack of protection of intellectual property rights.

The fourth risk is a weakening ability to negotiate with overseas parts suppliers. The expansion of global production systems has encouraged parts companies to expand supply sites across the globe. They support companies trying to advance into overseas markets while promoting design and performing basic research, and manufacturing parts. This makes companies largely dependent on them and erodes their ability to negotiate with the suppliers.

For example, a few years ago when supply ran short on polysilicon, a material used in semiconductor wafers, Japanese companies like Shin-Etsu and Sumco, which have more than 60 percent of the world wafer market, imposed a 10 percent price hike on its customers. They also required contract changes that included an extension period and a quota of required orders.

The last risk is conflict with overseas governments and consumers. If overseas plants and parts suppliers are negligent in observing environmental standards and managing labor conditions, that can cause conflicts with their host countries. They may also suffer complaints from consumers. When melamine was found in Nestle products made in China, Nestle reacted passively since only a small amount of the industrial chemical was found and it did not pose a serious health risk. This intensified the consumer outcry, and Taiwan and Saudi Arabia ordered Nestle to recall all of its products.

Toyota’s recalls imply that poor-quality products from overseas plants can happen to any company. As the complexity of product technology increases, the importance of quality control is also rising. However, managing this is difficult as the regional borders of production widen.

It is thus important not only to utilize the advantages of global production but also to prepare for possible risks related to quality decline and technology leakage and to react swiftly when a problem occurs. A company that possesses high customer trust will be hit particularly hard when a problem occurs, so a thorough management of the problem is crucial to retain customers. Meanwhile, the global expansion of a production system means an expansion into various social and cultural areas.

Thus the globalization strategy of spreading the headquarters’ key competitiveness across the world should be harmonized with a localized strategy that considers the features of the area. Besides the risk of quality slippage, companies need to devise a comprehensive set of measures on risks ranging from technology leakage, weakening of negotiating ability and conflict with governments.

*The writer is a research fellow at the Samsung Economic Research Institute.