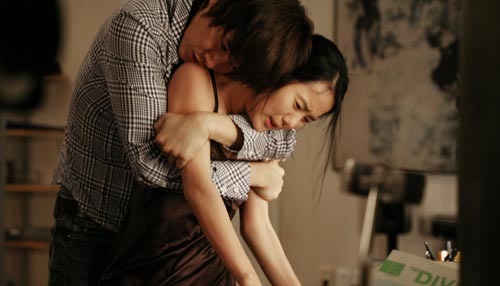 It’s been seven years since the actors Yoo Ji-tae, left, and Yoon Jin-seo played opposite each other in “Oldboy.” Now the two have reunited for “Secret Love,” above. Provided by Lemon Tree

Since Oedipus, entertainers have been telling stories of forbidden romance - and they’ve been rewarded with thrilled audiences gasping for more. By that metric alone, the new Korean film “Secret Love,” which will be released next month, is already a hit, since it features a love triangle between one woman and two twin brothers.

Yeon-yi, played by actress Yoon Jin-seo, has been married for just over two months, but her husband, Jin-woo, played by Yoo Ji-tae, has fallen into a coma, and she grows lonely and tired of taking care of him.

One day, Yeon-yi encounters Jin-ho (also played by Yoo), her husband’s identical twin brother, and the two can’t resist each other.

Of course, when Jin-woo wakes up from his coma, things aren’t so simple.

Apart from its soap opera theme, Secret Love marks the reunion of two dazzling actors: Yoo, famous for his sunshine smile, and the pale-skinned beauty Yoon created buzz even before filming began, since they also played one of Korean cinema’s most famous forbidden couples in the award-winning “Oldboy” from 2003.

“I was a college freshman and a newbie when I first met [Yoo while filming Oldboy],” Yoon recalled at a press conference Thursday.

“So it took a lot of courage for me to read through scripts with other seasoned actors, but he was the one who encouraged me throughout filming, especially when I read lines from the suicide scene. He held my hand.”

Yoo, now an actor and director, says he would like to make another film with Yoon after another seven years have passed.

Due to the nature of the plot, Secret Love has some very steamy scenes, and they weren’t easy for Yoon. But the actress said she chose to appear in the film because it has something to say about women.

“Over the past couple of years, Korean films have dealt with male-centered stories, but this touches upon women and their inner feelings when it comes to love.

“It was hard, of course, for me to shoot bed scenes, but it didn’t stop me from choosing this one.”

For Yoo, playing identical twins was the hardest part. “Jin-ho is outgoing and social, but Jin-woo is a kind of introvert. He’s also serious and conservative. So it was a little confusing for me to act out a twin brother.”

It was a daunting task not only for Yoo but for the crew. It took 20 million won ($17,346) to make a dummy of Yoo to play bedridden Jin-woo, while the production team also splurged on computer graphics for when the brothers appear together.

The film’s locations are also far-flung, ranging from Taean Beach to the highest bridge in Korea, which is located around 700 meters (2,296 feet) above Mount Daedun.

Kim, often dubbed “King Midas” for his cinematographic touch, participated in many films known for their beautiful visuals, including “One Fine Spring Day” (2001), “The Host” (2006) and “Happiness” (2007).