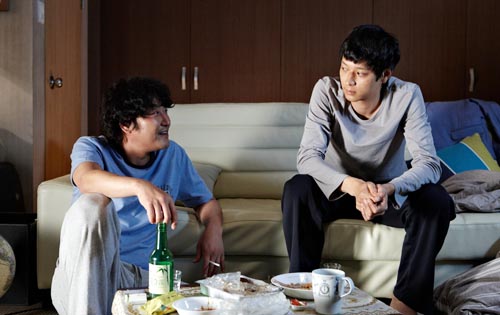 Politics and comparisons to similarly themed movies aside, “Secret Reunion” ultimately feels like a solid buddy movie, with well-developed characters, a delicately layered plot and a tightly controlled pace.

The two next encounter each other six years later. Han-kyu has been fired from the NIS, and Ji-won has been abandoned by North Korea. Lee now operates a private detective agency which hunts down runaway Vietnamese brides and brings them back to their Korean husbands.

He asks Ji-won to join. The North Korean agrees, and the two eventually get to know each other as men, ending up the “blood brothers” of the Korean title’s literal translation.

Han-kyu and Ji-won are complementary foils - opposite but the same at once. Besides the great North and South Korea divide, the two are like oil and water, with Lee being a laid-back, sort of goofy but worldly man reminiscent of many Korean ajeossi (middle-aged men), while Gang is a serious and rigid young man who is idealistic at heart.

Both men, however, are on the same deserted boat. They are alienated by the people or country they work for and separated from their families. Isolated, frustrated and weary, the two distance themselves from others while they struggle to find their humanity.

The strength of the character developments are supported by meaty performances from both actors, as Song provides adequate comic relief while Gang tugs the heartstrings with his portrayal of his character’s stoic exterior and pure idealism colliding.

Ji-won’s internal fight between his quest for humanism and his work as a Northern spy is dealt with elegantly in the hands of director Jang Hun, especially in scenes in which Ji-won interacts with Vietnamese immigrants with quiet tenderness and understanding.

In them Ji-won sees himself, a weak outsider who came to South Korea for a new future only to be disheartened.

There have been criticisms about the ending, which when compared to other North-South spy movies including the massive hit “Joint Security Area [JSA]” (2000) may be a bit too optimistic. And it’s true that Ji-won, in the end, survives a fall from a tall building “Die Hard”-style, while the bad guy dies with one bullet through his heart.

But maybe a decade after “JSA,” audiences are searching for a little more hope. In light of recent, rather grim news about the North’s resistance toward the global community, who can blame them?