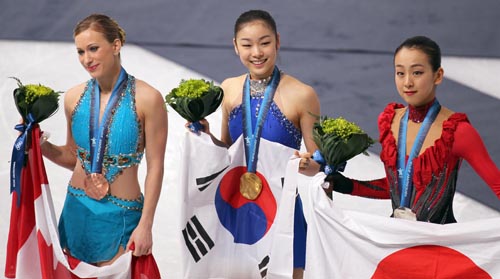 VANCOUVER, British Columbia - Kim Yu-na put one hand to her mouth and let the tears flow.

The “Queen” had taken on all the pressure and delivered royally. 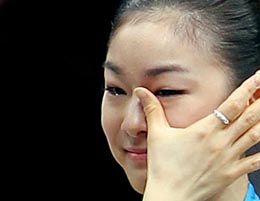 Having set a world record of 76.28 points in the short program on Wednesday, Kim soared to 228.56 combined points, shattering her previous mark by more than 18 points. It will go down as one of the greatest performances in figure skating history, and is Korea’s first medal at the Winter Olympics in a sport other than speed skating.

Kim has been dominant this season and made a habit of spectacular performances, but even she was dazzled by this one.

“Oh my God!” she exclaimed when she saw the tremendous score of 150.06 points in the free skating program - a mark her top competitors could only dream of. Kim’s coach, Brian Orser, pumped both arms, shaking his clasped fists over each shoulder.

“I still can’t believe what I have accomplished. I was shocked to see those types of scores and I feel like I’m dreaming right now,” Kim told the media. 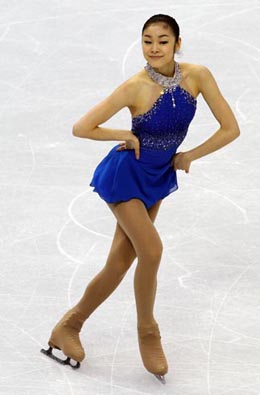 Kim Yu-na in her cobalt blue dress during her record-setting free skating routine at the Pacific Coliseum yesterday.

Skating to George Gershwin’s “Concerto in F,” Kim put one hand on the small of her back and gave a flirty little smile that set shutters clicking throughout the building as the music lifted the first time. Kim was flawless in her routine and completed all her seven jumps, including the triple lutz-triple toe loop combination to perfection.

With her rival Mao Asada posting her personal season-best score of 73.78 points in the short program on Wednesday, it was projected Kim would need a score equal to the world record of 133.95 points she earned at the Trophee Eric Bompard in Paris in October of last year to secure a gold medal. Kim shattered the mark with a score that would have been good enough for a top 10 ranking in the men’s competition.

When she finished, you could almost see the pressure fall away as Kim bent over and covered her mouth. The tears continued to flow no matter how hard she tried to blink them back, and she held up her hands helplessly when she reached Orser.

“I’ve seen a lot of skaters shed tears at competitions. It left me wondering as to what kind of feelings led to such emotional reactions,” said Kim. “I cried for the first time after a competition. I don’t know why I did. I was elated and it felt like everything finally came to an end. I wanted to get the Olympics over with.”

In attendance at the Pacific Coliseum were Kim’s parents. It was the first time that Kim’s father watched his daughter compete internationally in person. Kim’s parents were seen weeping in the stands at the end of their daughter’s routine.

“I want to thank my family. Although my mother always accompanies me to competitions, it was the first time my father watched me in person at an international competition. It feels even better to have achieved my lifelong goal with my parents in attendance,” Kim said.

It almost wasn’t fair that Asada, skating next, had to try to better Kim’s performance. She couldn’t. It wasn’t even close. Asada, who has swapped titles with Kim since their junior days, is one of the few women who even tries a point-packing triple axel, and she did two yesterday. But she melted down later, stumbling on the footwork into her triple toe and forcing her to cut it to a single.

“Because there was so much noise from the crowd, I was not able to hear her score,” Asada said. “But judging from the loud reaction, I knew she must have had a great performance.”

Asada looked stone-faced as she waited for her marks, and she didn’t even crack a smile when she got her silver medal. She earned 131.72 points yesterday for a combined total of 205.50 points.

“As I have prepared, I completed the triple axel jump twice ... however, I did not have a great overall performance today. I made some mistakes,” stated a sobbing Asada to the Japanese media.

Joannie Rochette of Canada performed an emotional and expressive portrayal of “Samson and Delilah” to earn 131.28 points in the free skating program and 202.64 total points for a bronze medal. The Canadian skater’s mother had died of a massive heart attack just hours after arriving in Vancouver to watch her daughter skate.

Kwak Min-jung of Korea, competing in only the second senior competition of her career, finished 13th overall with a combined total of 155.53 points.

As for her future plans, Kim stated she would like to enjoy some time off to rest. The newly crowned queen of figure skating will make a brief return to Korea before heading back to Toronto, Canada to start preparing for the ISU World Figure Skating Championships, to be held in Turin, Italy, from March 22 to 28.