Trading in a PPK for a loaded finger

Trading in a PPK for a loaded finger 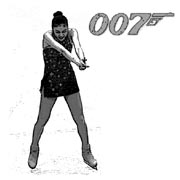 Ian Lancaster Fleming, a former journalist, published a spy novel in 1953. It was titled, “Casino Royale.” The main character was James Bond, known as 007. Fleming wrote about the activities of the spy based on his experience as commander of the British Royal Naval Volunteer Reserve during World War II.

Bond became famous worldwide when the story was turned into a film. The first film was known in Korea as “007, License to Kill,” but the original English title was “Dr. No.”

But there’s another character vital to every Bond movie: the “Bond girl.”

The first Bond girl was Ursula Andress, who played Honey. Since then, the actress with the best “physique” at the time usually played the Bond girl.

Halle Berry, who appeared in the 20th film, “Die Another Day,” was also a great actress and won the Academy Award in 2002 for “Monster’s Ball.”

Bond girls have had diverse nationalities, too. The first Asian Bond girl was the Japanese actress Mie Hama, who appeared in the fifth James Bond film, “You Only Live Twice.”

The main character, the Bond girl and the car may change, but there is one thing that does not change. He always carries a pistol.

In the first film, “Dr. No,” M tells 007 to change his pistol from an Italian Beretta to a German Walther PPK, a 7.65-millimeter caliber seven-shot pistol. It is the same model Kim Jae-kyu used to shoot former President Park Chung Hee.

The model of pistol is upgraded as 007’s opponents arm themselves with machine guns and send out more and more people. In “Tomorrow Never Dies” Pierce Brosnan used a Walther P99, a 9-millimeter, 16-shot pistol. Yet in the most recent film “Quantum of Solace,” Daniel Craig’s Bond returns to the agent’s old Walther PPK. It’s the 22nd Bond film.

The world’s eyes were on Kim Yu-na, who transformed into a Bond girl at the Winter Olympics in Vancouver, leaving flames on the ice to burn her Japanese and Chinese competitors.

Spectators especially held their breath when she fired her “pistol” at the end of the short program. It was as if she had slain the audience - and her Japanese competitors Mao Asada and Miki Ando fell in one shot, too.

In 007, Dr. No lived after being shot in the chest because his heart was on the right side, but Kim Yu-na’s competitors will not be able to get back up. Her pistol, aimed at a gold medal, didn’t miss.