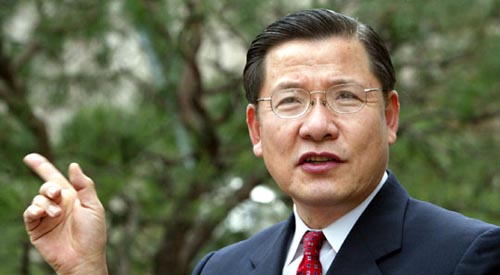 Professor Sohn Sung-won of California State University is a fast worker. He doesn’t sit around and wait for economic indexes to be released. He gets out there and sets up meetings or teleconferences with Wall Street CEOs or even field workers.

“The right economic outlook could not be put out whenever it was really needed if I solely depended on indexes usually released two or three months [after data has been collected],” said Sohn, who is already past 60 but still shows the drive of a much younger man.

The Wall Street Journal named the Korean professor one of the top five economic forecasters of 2009, and Sohn said his best asset is his experience. “What computer analyses can’t follow are years of experience and sense.”

Based on his analytical skill, Sohn forecast early last year that American personal consumption expenditure, a primary gauge of consumer spending, would rise by 1.5 percent. The actual figure turned out to be 1.4 percent, putting Sohn closer than the other four on the Journal’s list.

Sohn also pegged U.S. unemployment at 9.3 percent (the actual figure is at 10 percent). His economic growth forecast, minus 1.5 percent, was a bit off, though - the actual figure was 0.1 percent.

The WSJ selected the best economists based on five predictions.

Sohn’s outlook for the U.S. economy in 2010 was not optimistic.

“The possibility the global economy will fall into a double dip stands at 25 percent,” said Sohn, blaming a cash-strapped government that will not be able to spend its national budget and possibly lower investment by the private sector.

Regarding the Korean economy, Sohn said, “Korea is a small ship floating on the ocean called the world economy, and thus it is inevitable Korea will face difficulty if the global economy suffers from turmoil.”

Sohn earned his Ph.D. in economics from the University of Pittsburgh and an MBA from Harvard Business School.

He was a senior economist on the President’s Council of Economic Advisers during the Nixon administration in 1973.

Sohn has also served as president and chief executive officer of Hanmi Financial Corp. in Los Angeles and as chief economist and executive vice president for Wells Fargo.