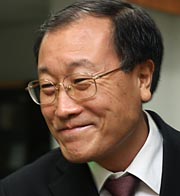 Shareholders of the Munhwa Broadcasting Corporation yesterday selected Kim Jae-chul, a veteran journalist who currently heads the Cheongju station of the nation’s second-largest broadcaster, as the company’s new president.

The board of directors of the Foundation for Broadcast Culture interviewed three candidates in the morning and voted for Kim to lead the broadcasting network. The foundation is the largest shareholder of MBC, having a controlling stake of 70 percent.

Of the nine board members, three who were backed by the opposition parties abstained from voting.

With the selection, Kim will serve the remaining one-year term of former MBC President Ohm Ki-young, who resigned earlier this month. Ohm stepped down in protest of the board’s decision to appoint key MBC executives who were not recommended by him. The three opposition side board members protested Kim’s appointment.

“A broadcaster is a mirror that reflects our society. If this mirror is broken or tainted, the people won’t be able to make the right judgments,” said Jeong Sang-mo, one of those board members. Jeong added that the Foundation for Broadcast Culture has become a regent.

A graduate of Korea University, Kim joined MBC in 1979 and worked as a reporter, concentrating on social and political news.