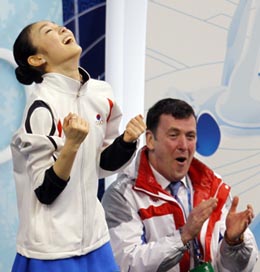 As the Korean figure skater Kim Yu-na took the ice for ladies’ free skating in Vancouver, Koreans were glued to their television sets and computer monitors, hanging on Kim’s every step, jump and spin.

Since Kim was slated to start her routine at 1:21 p.m. Korean time, office workers across Seoul grabbed a quick lunch, and then gathered around TVs or a colleague’s computer to view what would be a record-breaking performance.

The scene at a central Seoul office was probably typical of other workplaces in the nation’s capital. Normally buttoned-down, middle-aged men in dark suits, who likely couldn’t tell a triple lutz from a triple toe loop, were transfixed by Kim.

When Kim all but clinched the gold medal with a world-record 228.56 points, the men jumped out of their seats and screamed for joy, giving each other high-fives and bear-hugs.

“This just makes me very proud to be Korean,” said Kim Sang-yeon, who asked his business partner to finish their lunch quickly so that he could come back in time for Kim’s skate. 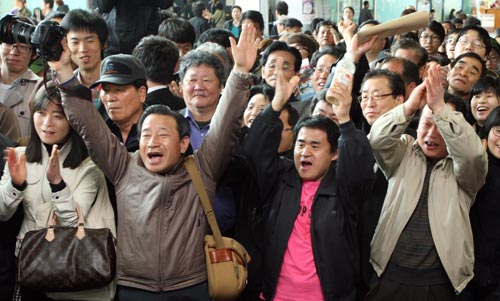 Koreans in the lobby of Seoul Station erupt in joy yesterday as they watch Kim Yu-na finishing her performance at the women’s free skating event at the Vancouver Winter Olympics with the new world record. [YONHAP]

One of his colleagues chimed in: “I didn’t know figure skating could be this exciting. It was easy to see why Yu-na scored so much higher than everyone else.”

Hundreds of Koreans crowded the waiting hall at Seoul Station to watch Kim on TV. AGB Nielsen Media Research said Kim’s performance drew a 36.4 percent rating, the highest for a daytime network program since such data were first kept in 2005. 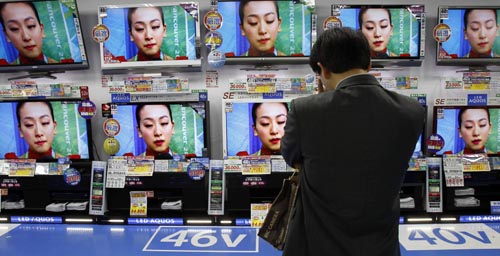 A man at an electronics retail store in Tokyo yesterday reacts as he watches a television broadcast of Japan’s Mao Asada crying after her performance. [REUTERS/YONHAP]

When Kim shed tears right after her program, it also hit those watching on television - even outside Korea.

“When I saw her cry, I had tears in my eyes, too,” said Aaron Park, a Korean resident in Los Angeles. “I was just so proud of her.”

“There were simply no flaws in her performance, from her skating to her expressions to a lovely cobalt blue dress,” the Associated Press wrote. “While other skaters slow down as they approach their jumps to steady themselves, she hurtles into them at full speed, yet touches down with pillow-like softness. Her connecting steps are like performance art.”

During Kim’s final spin moves, Sandra Bezic, an analyst for the U.S. Olympic broadcaster NBC, called Kim’s program “one of the best I’ve ever seen” at the Olympics.

After it was over, commentator Tom Hammond exclaimed: “The coronation is complete.”

Kim also graced the opening page of the Web site for the U.S. magazine Sports Illustrated. The banner headline read, “Queen of the Ice,” a reference to Kim’s nickname, “Queen Yu-na.”

The Japanese media were more subdued as their two former world champions struggled. Mao Asada botched several components and settled for silver, and Miki Ando finished out of the medals.

In its English-language report, Kyodo News noted Kim’s effortlessness by saying, “She might as well have been relaxing on a tropical beach sipping a pina colada rather than battling it out on the ice for the gold medal at Pacific Coliseum.”

Int'l students urged to get vaccinated before arriving